" … if you're a supporter of a club, you have to be, through thick, thin, laughter, smiles and tears" – Bob Wilson
270 Comments

Arsenal Versus Chelsea: End Of The Beginning 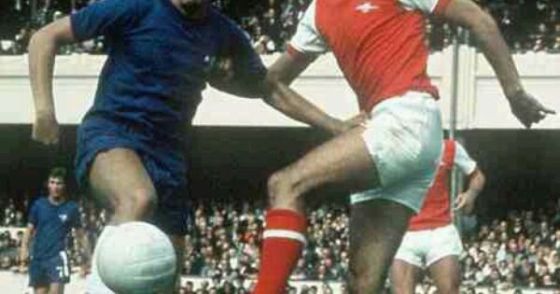 Three FA Cup finals in four years and a team so consistently excellent that finishing fifth is seen as a major disappointment. What a gloriously happy accident that my seven year old self should have chosen to support the side in the red shirts and white sleeves all those very many years ago. Was I seduced by Alan Hudson’s flowing locks? By Peter Osgood’s bushy grips? Not on your Nelly. Not while Bob Wilson gazed flint eyed from beneath his goalie’s cap, not while Frank McLintock strode the muddy pitches like a colossus, defining my callow concept of masculinity, and never for a moment would the brutish Ron Harris nor the agricultural David Webb inspire or seduce me while Charlie George flicked the lazy fringe from his eyes and strolled with a careless nonchalance from the pitch and into my dreams.

The strand which connects this ageing, aching old man to the bewildered, excited child is unbroken. Nothing else in my life has lasted as long nor enjoyed so many reinventions. The cup final morning in 1971 runs seamlessly forward through cruel uncaring time to this expectant May morning. It is a path littered with noble victories and bitter defeats. From George Armstrong through Alan Ball to Liam Brady the team evolved, my heroes changed faces, shirt numbers and positions but The Arsenal remained constant. From David O’ Leary to Tony Adams, David Rocastle to Anders Limpar, Dennis Bergkamp to Tomáš Rosický the thread has unspooled until here we are today licking our lips at the prospect of watching Mesut Özil and Aaron Ramsey on the Wembley turf in the most hallowed of our footballing traditions, the final of the FA Cup.

Am I really as excited as a seven year old? Is it even possible to compare this creaking wreck of a man with the fresh elasticity of an unspoiled boy? Only in this. Only on cup final morning. And no matter how the machinations of mega powerful international money men nor the spiteful insolence of the modern internet supporter try to force me from the game, I cannot conceive of a cup final morning which won’t matter to me – as long as Arsenal are on the ticket.

Today the ineffable powers which control the football fates have dealt us an unenviable hand. Losing players to injury, suspension and illness in the week before such a game and all of them from the same vital position on the pitch is a wicked doom to befall Arsène Wenger. The re-jigged formation which so altered our league form will now either need to be scrapped or placed into the hands of players unfamiliar with one another’s strengths and shortcomings. Players who will face the champions of England, a side in their pomp, playing with supreme confidence and who’s boundless riches have seen them assemble a collection of the world’s very best.

So can we approach the match with hope in our hearts? Dare we dream of victory? Of wresting back our record from Manchester United? I say emphatically yes. Whatever the shortcomings of our back five in terms of familiarity and match fitness they are still fine footballers. Not only that but the pointy end of our side is producing some of the most eye catching play we’ve seen in years. Aaron and Granit understand each other as well as they ever have, Mesut and Alexis are both at their peerless best right now and either Danny’s pace and guile or Larry’s strength and finishing can provide the perfect foil for both. With Theo and AOC waiting in the wings to provide blistering finishing pace to the game we have no reason to fear the outcome.

So to those of you at Wembley today I wish you may have a final to remember. A day to stitch to the tapestry of your supporting life. A cup final which reaches back to past glories just as it will stretch on into the future. I hope to be back from work in time to join the worldwide television audience. My thoughts will, however, be with my little nephew for whom this game marks the end of his first season supporting the Arsenal. I envy him that leap into the unknown, the foundations of nostalgia he lays today on which his life cheering the boys in red and white will be built.

It’s just another final for us old fogeys but for him this is the biggest match ever. The greatest moment in his supporting life. These years are, for him, the golden age. What a journey he has set out on, I pray it begins in harmony and with a victory.

270 comments on “Arsenal Versus Chelsea: End Of The Beginning”