" … if you're a supporter of a club, you have to be, through thick, thin, laughter, smiles and tears" – Bob Wilson
79 Comments

Posted by pedantic George @arseblagger on May 4, 2019 in All Posts 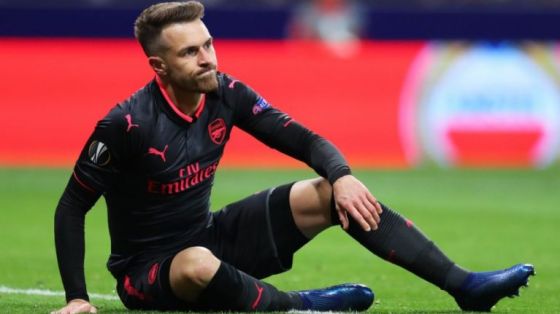 Aaron Ramsey has played his last game for Arsenal after suffering a muscular injury during their Europa League quarter-final against Napoli. The midfielder pulled up feeling the back of his thigh in the 33rd minute and was replaced by Henrikh Mkhitaryan.

What a sad way for it to come to an end. After 11 years our top scoring Center midfielder of all time is literally limping out of the club. It’s a devastating blow for him and Arsenal. I saw a stat recently that we have averaged twice as many points per game with him this season, than without him. I’m not at all surprised.

The lad has scored or assisted 129 times in his 369 appearances for Arsenal.that’s better than a 1 in 3 games,direct contributions to a goal, outstanding for a center midfielder. And a center midfielder is exactly what he is. At times he has covered as attacking Mid and even as a wide forward, that is testament to his general overall value to the team. Under Arsene Wenger, when fit, he played. He played no matter who else was fit, he played somewhere.

His work ethic, professionalism and heart are everything anyone could ask from a professional football player.

I won’t go into his history and injury record because everyone knows all about it but I will say that without the initial leg smashing attack and the subsequent muscular problems that have blighted him, he would likely have doubled his goals and assists total.

He is a quiet ,well spoken ,polite family man, that was shown loyalty by Arsene Wenger and returned that loyalty in spades. I have never seen him shy away from the ball or put in less than 100% effort in the 11 years he’s been at the club. He is brave and adventurous on the ball and is almost always the player that has covered the most distance at the end of each game. When in midfield with Arteta he regularly was in the mid 90s in % passing stats. He is the complete box to box player.

On top of all that he is staggeringly good looking, immaculately well dressed and campaigns for animal welfare and other green topics. Seriously, what is not to like about the lad?

Yet despite all this “opinion on him is divided”. Why? Well I would suggest it’s because many of our fans are as thick as mince.

Now he is heading off to Juventus on £400k per week, so we don’t have to feel sorry for him, oh no, but we should feel sorry for ourselves. Why? Well because we could be losing or last legend, that’s why.

Football has changed and support has also changed, and not for the better. It used to be that if a player was committed to the club for a few years and scored ,or just contributed, to the winning of silverware, his legendary status was assured. But not anymore! Oh no, a few perceived bad games, an injury or a transfer can all lead to his status being revoked by our over demanding fans.They turn on, and turn their back on, players as quickly as they can scurry to their twitter accounts. That and the tendency for players to maximise their wages by moving, or the clubs wanting to profit from player sales, mean the day of the one team man is dead, It’s very hard to become a legend if a player only has a short window to cement their status.

Well Ramsey has put in the years, the effort and conducted himself with the class that put him firmly in the legendary status, and that’s before we add the two FA Cup winning goals.  Add to this that he refused to shake Piers Morgan’s hand and allegedly sat RVP on his arse with a right hook and he is elevated to super legend.

So make no mistake Aaron Ramsey is an Arsenal legend, and perhaps the very last of them.

Goodbye, good luck and thanks for the memories sweet prince of Wales.

This is how I will always remember you. 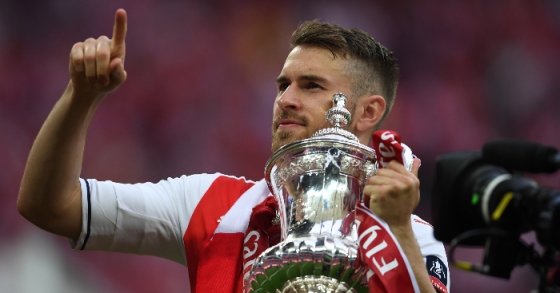 “Come writers and critics
Who prophesize with your pen
And keep your eyes wide
The chance won’t come again
And don’t speak too soon
For the wheel’s still in spin
And there’s no tellin’ who
That it’s namin’.
For the loser now
Will be later to win
For the times they are a-changin”

And of the game tomorrow, here’s Labo

Thanks George for that fitting tribute to One Aaron James Ramsey.
Arsenal is hosting the low flying Seagulls at the Emirates who just secured their Premier League survival, courtesy of Cardiff losing to Crystal Palace. Seem like a good enough reason for them to be at the beach right?
However, we shouldn’t lose sight of the business of the day, getting three points to keep that sprinkling of hope alive should either Chelsea or Spurs drop any points in next week’s last round of league fixtures. And after treating the last three PL games like that chore they just can’t be bothered with, they can’t afford their minds being elsewhere.
We still wondering how we conceded nine goals in that three rather forgetful league games, we can take comfort that Brighton don’t seem to enjoy the attacking part of the game these last few months. Their goal vs Newcastle last weekend was their first in eight games.
So go out there Gunners, you know what you need to do. Let Aaron “Arsenal last legend” Ramsey and Petr Cech bow out in style as the Emirates faithful says their heartfelt farewell.
@LaboGoon

← Arsenal with a Slow Start and a Fast Finish
Oh Blimey,What Was That? →