" … if you're a supporter of a club, you have to be, through thick, thin, laughter, smiles and tears" – Bob Wilson
26 Comments 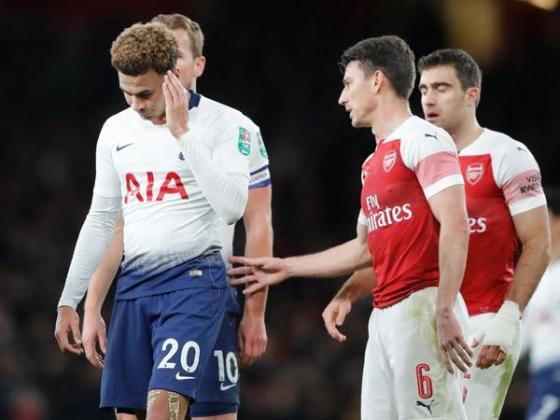 It is always disappointing to go out of a Cup competition at the quarter final stage. To lose to the neighbours, at home, and with our opponents clearly, in my view, a step ahead of us for most of the contest is particularly galling. The evening started brightly. That our talismanic referee Jonny Moss was in charge augured well before kick off. I think both sides played the best teams they had available. Attacking wise AFC and TH bristled with quality. Unfortunately our injury list left us under-equipped in defensive personnel compared to the visitors.

The outcome of the evening pivoted on a handful of key moments.

It was a far more even opening that the NLD at the start of the month. However, as then, we could/should have been at least one goal ahead by the twelfth minute but two good chances were not converted. Totties were evidently keen to exploit our high-press and perceived defensive fragility and, as if by malign magic, a stumble by Sokratis created an opportunity for Son to fire them into the lead. One shot, one goal.

We did not however panic and commendably snapped back into the game. We controlled the ball and territory. The Totties looked deadly on the break. From that point on in the first half, and much of the second half, we huffed and we puffed to recover an equaliser. To their credit, and far more successfully than three weeks ago, Tottenham threw their bodies in and hustled and bustled us backwards and sideways. We struck the posts, we skied shots, we won corners but each was stoutly defended. The longer the game went on the less likely it looked we would score. Our usual second-half-rush fizzled out.

The impact of a poor second goal clearly made the steep hill we needed to climb to get back into the game that much more vertical, but  it was a night when it looked to me we  were unlikely to get a single goal. In respect of the circumstances of he second goal I presume, indeed I hope, there is a great deal of shouting, pointing and angry words this morning at Colney. It was fucking ridiculous.

As was the plastic bottle.

A strange factoid though; Paulo Gazzaniga is the first Spurs goalkeeper to keep a clean sheet away at Arsenal in any competition since November 1998, when Espen Baardsen did so at Highbury. Espen Baardsen eh ?

Anyway, the last time we lost two games in a row was August. Our first game after those losses to Citeh and Chels we played against the claret and blue clad ‘Ammers, on Saturday at home,  who we beat comfortably. After that we went 22 games unbeaten. We play Burnley on Saturday. You can probably see where I am going here.

And finally, as it is almost holiday time enjoy the big feller cavorting with his fans before last night’s contest.

26 comments on “Arsenal: No end product”