" … if you're a supporter of a club, you have to be, through thick, thin, laughter, smiles and tears" – Bob Wilson
97 Comments

Arsenal: Sunk by the Saints 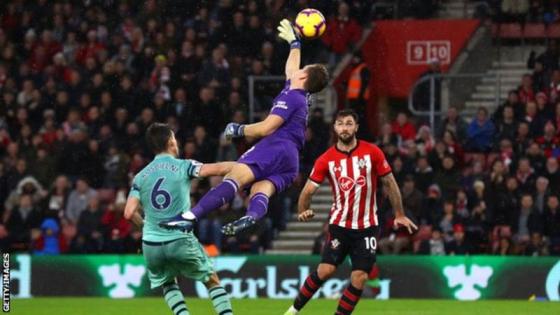 A disappointing way for our 22 game run to end. On a horrible,  wet afternoon on the South coast, we were knocked about and put out of our stride by the home side who set out to do exactly that. Nevertheless for long periods of the second half the game was in our grasp. The points were ours for the taking. Then Bernd, who moments before had pulled off a ‘worldie’ from a bullet Yoshida header, forgot where he was, flapped a hand out into space, and Austin buried the  header.

It was as long ago as the 18th August since you and I last supped at the well of footballing misery. To go down to a late home winner, against the run of play, and the result of a goalkeeping error is just about the 1-2-3 of footballing misfortune. But there you go, the run had to end one day.

Of the game itself ? We made a number of errors that were punished and our usual ability to drag ourselves back into the game deserted us in the final ten minutes. As I say it was a contest we wee shading until calamity struck so the Saints can take some  pleasure in their fighting performance and three badly needed points.

For us we saw Kosc and Nacho return after injury. The Spaniard looked fine. The club captain looked like a man playing his first game for eight months. We had no real alternatives to putting Kosc in. He did his best.

Guendouzi and Torreira I think put in their usual hard work. Two goals for Mkhi, the first a cleverly directed header, will have cheered up the Armenian after a couple of frustrating starts. Laca and PEA put us up two gears after half time and while both had additional chances to kill off the home side I thought both did well.

For Emery the game will have been a useful experience. Our coach will have a chance, over the next few days,  to look at what went wrong and what went right. With no unbeaten record to confuse matters he can sort though  his options.

Totties up next, and before that perhaps a little ritual humiliation on Merseyside for the Special One.

← Arsenal: Not Unwary in the Parish of St Mary
It’s A Quarter Final BTW ! →

97 comments on “Arsenal: Sunk by the Saints”