Posted by pedantic George @arseblagger on May 31, 2017 in All Posts 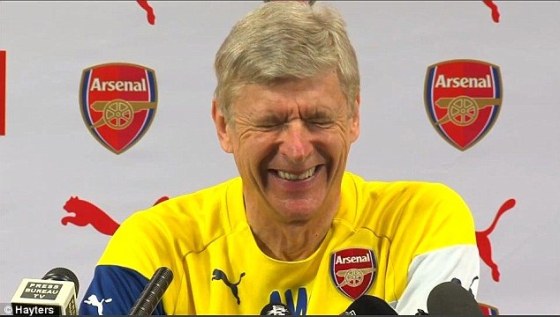 So today we can expect an official announcement from the club which will confirm that Arsene Wenger will continue as Arsenal manager for at least a further two years. This news will be met by varying degrees of enthusiasm and disappointment across the fanbase, media and social media.

This is absolutely a triumph of sense over stupidity. There is no way that our greatest ever manager ,being at the helm for an extended period, can be anything but a tremendous result for the club.

Make no mistake about it, Arsene Wenger is a colossus of an elite manager. In fact he is the very epitome of “elite manager”. I believe he is every bit as good as he ever was, all this bollocks about him being past his best is just that – BOLLOCKS.

Lets consider for a moment who wanted him out.

We can start with the easy and obvious target, the absolute melts on AFTV. Seriously, just look at and listen to this shower of Muppets. I seriously doubt any of them could tie their own shoelaces, and they must surely have supervised meal times.  They have consistently embarrassed the lot of us by association to the club. They claim Arsenal are mocked by fans of other clubs, well too right they are, and they are the main reason. People defend Robbie, saying he gives the fans a “voice”, but he doesn’t, he give a select few idiots a platform. He cultivated the stupidity, it’s his garden, they are his weeds. He could have taken AFTV in any direction, but he chose to make it The Jeremy Kyle Show.

The vast majority of Arsenal bloggers haven’t helped either. These special leaders of opinion have taken every opportunity to show us how smart they are and how stupid Arsene and the board are.  They spout their expert opinions on failures in tactics formation, fitness, players, finance, well everything really, and most of them are doing it for no other reason than to let the readers know how much they understand about football. The problem is it actually shows anyone with an ounce of sense the very opposite. They know nothing worthwhile. Nothing. Zilch !

Podcasters, see above, except they love the sound of their own voices as well. Again, I have to say “most of them” As with bloggers,  there are some rare exceptions to the rule.

Pundits?!?!?! . We are served up with what can only be described as a bunch of tossers that think management is “paint by number” . Forget Arsene for a moment and see how they have now collectively decided Pep doesn’t understand English football. The qualification for the job appears to be that they once played football and are incapable of actually doing a job in management. Their stupidity is without bounds . To be fair, they get nothing right, it’s just we notice their crapness more when they speak about our own specialised subject. The Arsenal.

Twitter super fans. These might just be the worst of the lot, they are known for nothing in life apart from their hatred of Arsene Wenger. They are an embarrassing stain on Arsenal’s underpants.

Just watch them all start playing the victims now and claiming they did it for the love of the club. Well no, they did it because they are no marks that saw an opportunity to become somebodys. And guess what? They will all be fuming because the club has recognised they are nobodies and ignored their pathetic drivel. I don’t care how many readers, listeners of followers they have, they are important only in their own minds and to the sheeple that are stupid enough to be led by the nose and accept the bilge they spew.

Where do we go from here then? Do we say “let’s forget that they did everything possible to destroy our season and move on” ? Well no, because they won’t move on, they are defined by the toxic atmosphere they created. They are nothing without it. They will cling to it like Ishmael clinging to the wreckage of their sunken protests. There is no point offering an olive branch because they don’t want to grasp it.

All we can do is try to ignore them. Those that backed the manager and those that respectfully wanted a change can come together. The decision has been made. Lets move along together, And here is the important part – Give the club and the team the best atmosphere to thrive in.

Just last Saturday we got a glimpse of what the team is capable of. We saw Arsene’s vision of how he want’s his team to play. We have won 3 trophies in the 4 years since spending restrictions were loosened. But we are told we are regressing. Bloody hell. It makes my head spin.

I got asked a question on twitter (loaded of course) it was “do you really think Wenger will win the PL in the next 2 years”. My answer is no, I don’t believe he will. But what I do believe is Arsene gives us the best chance to defy the odds and win it. We might spend £100m in this window, but City (for example) with one of the best managers in the world. with a squad already packed full of hugely expensive players, will spend £300m. So I “expect” a team like them to win it. But I hope our continuity and the brilliance of Arsene can do the business.

It’s clear there has been a disagreement at board level about something. However Arsene is unlikely to either tell us about it or allow anyone else to do so. Whatever it was Arsene has prevailed. There will be no Director of Football selecting transfers and deciding who should be sold, sense has won the day and whatever faults Kroenke might have he has backed the proven winner. There may be casualties, but at least we can be confident that when push comes to shove, Stan knows what is in the best interests of our great club. And that is Arsene Wenger, all day, every day and twice on match days.

That’s it then, everyone that can come behind the manager, players and club have this opportunity to do so. We should take it and ignore the proven failures that refuse to want to support unconditionally.

Did I mention I was happy?

← D-Day At The Arsenal As The Board Decides
The Amazing Mr. Wenger →