" … if you're a supporter of a club, you have to be, through thick, thin, laughter, smiles and tears" – Bob Wilson
80 Comments

We have our swagger back

Watching yesterday’s efficient despatch of West Ham in the gentle Spring sunshine of North London it occurred to me that we definitely have our swagger back, domestically at least.

The Appy Ammers arrived with few expectations of a victory after a 14 game run against the Arsenal with not one win but hopeful of making us work, clinging on and eventually stealing a point. Sam has form for this type of result. Never pretty but Sam would never claim to be pretty. Like dogs his teams take on the characteristics of his misshapen bulldog skull.

Alas within a short while it became clear even to the visitors’ noisy contingent that the best result they might hope for would be a respectable defeat rather than a definitive shellacking.

Our midfield movement from the first whistle opened the Ammers up. Players moved not as independent and disconnected units but in sequence, joined in a collective mind to look for the space, the opening, the weak link to exploit. Song to his credit battled hard, too hard once or twice, and Adrian was a warrior between the sticks. But the power was all one way, the force bearing down on the claret and blue goal. Oh yes, the confidence flowed through my system as the ball weaved and span across the baize, stroked, caressed and eventually potted by our finest crop.

And eventually it came, the hammer blow into the top corner just as the half time oranges were being cut. I share below a snap taken by excellent AFC photographer Stuart MacFarlane – if you don’t follow the man in Twitter you should. 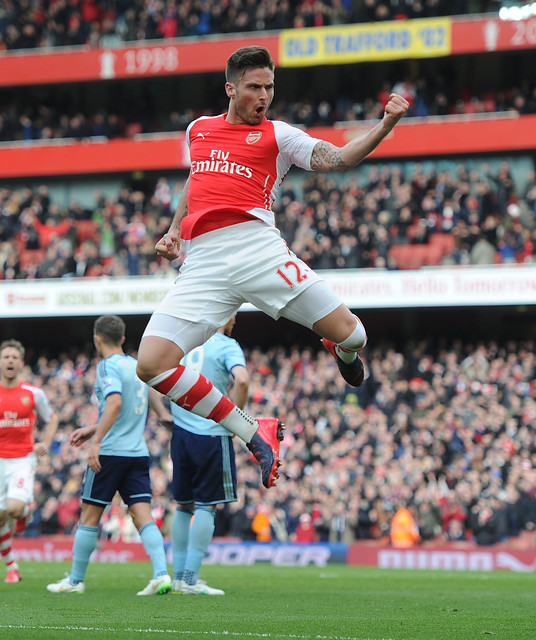 I did not realise the cod-piece was making a come back in modern sportswear but you have the evidence.

So 1-0 at the break and cruising, it should have been more.

And then the opening ten minutes of the second half ? Not good, not switched on when we came out and a better side than West Ham might have taken advantage. Fortunately while they had possession and pressed us back, and we appeared unable to keep the ball, they had no sharpness in the box to take advantage. The cloud passed over, the sun shone on. And so, inevitably, we started to control the game again. Santi and Danny came on, and our control developed into total domination. The next goals came, inevitable and very tidy they were against a team who, with ten minutes to go, had clearly nothing left to contribute but were out on their feet.

There may be those who tell you that West Ham, at just 0-1 down were “still in the game” to the 80th minute. Don’t believe it, They were never, ever in the game.

It finished 3-0, a distinctly unflattering score given our dominance. I did however have my fingers firmly crossed during that last few minutes for that third goal to go in, because of Tuesday. The third goal seemed important, a portent of future events, because of Monaco. And the man from Marseilles duly obliged. You know what I mean.

For all the patterns and systems it is about players and I thought Mesut was magnificent yesterday. A superb contribution with the ball, exquisite movement off it, and great energy. Kosc was a yard faster and a thought ahead of anything West Ham may have had up their sleeve. And le Coq is gradually becoming more creative, not just the “midfield beast” that the  experts demanded.

So enjoy your Sunday. Two interesting games later. I think we set off with great heart to Monaco after one of the best footballing weeks in a long time.

80 comments on “We have our swagger back”