" … if you're a supporter of a club, you have to be, through thick, thin, laughter, smiles and tears" – Bob Wilson
51 Comments

WOBs On The Ropes

Posted by pedantic George @arseblagger on February 2, 2015 in All Posts

Although I agree wholeheartedly with my old friend and ally, I was tempted not to post this. My thinking is that there are reasonable people (although I struggle to accept those reasons) that think it is time for Arsene to step aside. When I use the term WOB, I use it in relation to those stupid people that repeat unsubstantiated garbage, lies , and misrepresentations to make their points in a disrespectful and downright abusive way.

Also I don’t want us to be seen as an Arsene blog. rather than an Arsenal blog. But hey-ho.

Anyway, here it is, enjoy.

WOB on the ropes …

Old narratives die hard. It is well known that it is human nature to cling desperately to old paradigms and ideologies despite clear evidence to the contrary sometimes with disastrous consequences. Such is the current state of the seemingly permanent group of malcontents within supporters of Arsenal Football Club often described as the Wenger Out Brigade or WOBs for short.

The past year or so and into this new season must have been a stomach churning seesaw for the anti—Wenger zealots. Despair at the end of last year with Arsenal winning the FA cup, rendering the 9 year without a trophy mantra null and void. Untrammeled glee in December as Wenger was booed at the Stoke train station following a loss to the Orcs. From their point of view, Wenger might have scored a few tactical victories in the summer transfer window but the team was struggling to win games, languishing outside the top-four, proof in their eyes the old “frog” was unable to take the club forward 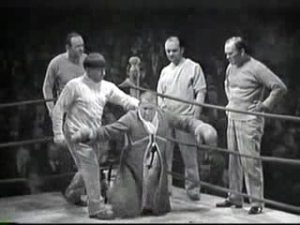 But while they rubbed their hands with glee there was some ominous signs. Alexis Sanchez was having an explosive start to his English career, totally unprecedented in the history of foreign players transitioning into the premier league. 12 goals and 7 assists so far  in the Premiership for a players who cost only £30 million compared to the £70 million that Barca stumped up for Luis Suarez must rank as one of Wenger’s best transfer steals ever,  arguably even greater than £25 million he coaxed out of Manchester City for Adebayor.

To add insult to injury, while Arsene was not having the best of starts, the WOBs long-held managerial alternatives have not cooperated with their narrative. Jurgen Klopp, the poster boy for managing with an inferior budget, given his recent successes over the German-colossus Bayern, has this season seen the magic evaporate with his club languishing in the relegation zone half-way into the season. Unlike Wenger who has kept Arsenal in the top-four despite years of losing his best players, Dortmund is reeling after first losing Goetze in 2013 and then Lewandowski in 2014. Kloppie’s luster has taken a hit. So has Roberto Martinez whose first year at Everton was a blinder. But the second-season syndrome has left Everton struggle to sustain mid-table mediocrity. As these managers flounder, so have the WOBs.

Fast forward to January 2015 and the old saw that Arsenal cannot beat a top team takes a big hit with victory over defending champions Manchester City at the Etihad, the first time since 2010. It wasn’t merely the defeat of a top-four team,  it was a hammer blow to the bogus narrative that stubborn old Wenger doesn’t do tactics. For months the boss had been tweaking our set-up, experimenting in real games with a 4-1-4-1, with predictably mixed results. A rare few were willing to give Wenger the benefit of the doubt of a badly truncated post world-cup pre-season and an unending rash of early season injuries to some of our best players (Koscielny, Arteta, Giroud, Debuchy, Ramsey to name a few).

Speaking of injuries, the malcontents seem confused as what to make of the newly employed fitness guru Shad Forsythe since they had proclaimed him to be one of their successes in their campaign against Wenger’s ancient training methods. Notice he escaped becoming scapegoat du jour.

Back to January 2015 and the victory over City, despite Wenger previously disclosed publicly for this season he had to tweak the system to make the team less vulnerable to heavy defeats as happened in the prior year (the scars of  Liverpool, Chelsea and Everton away are still raw) , the WOBs and their media enablers resort to lies and obfuscation. Rather than admit that the veteran manager had the nous to execute a difficult but necessary change, we are left with patent nonsense that the victory over City was due to Wenger finally listening to the players and playing a more defensive system. It took Kieran Gibbs in his own blog to confirm that the system had been discussed and agreed between player and manager in previous games, the difference at City was the execution. But why let facts get in the way of a false narrative.

Since City, it has been difficult for the malcontents and the pundits to ignore Arsenal’s progress as the season unfolds. Stoke, Brighton and the recent tonking of Aston Villa concurrent with the return from injury of Giroud, Ramsey, Walcott and Ozil has forced the malcontents underground. The media is now forced to admit that Arsenal is a serious contender for a top-4 position.

With mounting evidence that Wenger is close to completing the rebuild of another great team , you would think the WOBs would admit defeat and fade away.  With Tottenham coming in clear view over the horizon it is timely to remember that old narratives die hard and that it takes only one defeat for the hysteria and nonsense to resume.

51 comments on “WOBs On The Ropes”