" … if you're a supporter of a club, you have to be, through thick, thin, laughter, smiles and tears" – Bob Wilson
32 Comments

Let There Be Arsenal 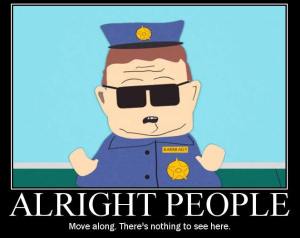 I let the mask slip at work yesterday. Friday, three minutes away from going home and the frankly fuckwitted semi evolved attitudes of my work colleagues finally got to me and I fear I bared my fangs. To be fair I’ve coped day in day out for six long desperate years and rarely if ever have I given vent to my true feelings. Without wishing to be self indulgent about the blog for which I’m writing, I want to talk about why this place is so important to me. Hey – there’s bugger all football to talk about so we can chat about the peripherals, the blogs or newspaper columns or broadcast media we like or dislike, can’t we?

When so much of one’s existence both personal and professional is spent tolerating other people who’s opinions make you piss razor blades and who you could cheerfully eviscerate without a backwards glance it is vital to have safe places where you can go and let out the steam. I had a cycling buddy who put up with me about as well as I did he and we would burn off calories and excess rage as we tore up the countryside each Sunday morning. It did me good. I have similarly over the years found people who share my love of certain bands or comedians or, as in your case, football.

The arrival of the internet was like a beneficent God smiling down on his creation and saying “Here, you don’t have to wait to read about your team in the paper or hope they will be featured on Match Of The Day. You can pick and choose blogs dedicated to The Arsenal and read about the team every day. I support them too you know” and we could. Suddenly we could find people who liked not just the same sport but the same team. But as with other great ideas God took his eye off the ball and left a serpent in the garden. Or an apple. Or something. In any case the blogs went wrong and rather than being a place to be yourself and relax after wearing the disguise at work all day or pretending to care about whatever your neighbour was waffling about, they became combative. We went there to fight the malcontents or adopt a semi neutral peace keeping pose and attempt not to ruffle too many feathers.

This is why Positively Arsenal has become so important. I can be me here. I don’t water down the message or put up with people I’d rather poke with a sharpened stick. And one of the things PA has set its sights on is not disappearing down the path of so many other blogs. We won’t offer the manager tactical advice. We won’t ape the print media. And we won’t just repeat the Boss’s press conference when there’s nothing else to write about. We will be honest and tell it from the heart.

So now of course I’m in a quandary. Saturday morning and absolutely no football to talk about. What to do? It’s a little early for a Bayern preview and I’m buggered if I’ll talk about the FA Cup when we’re not even in it. I could write about Bristol Rovers six pointer away to Chesterfield. Like many of you I have a second or ‘local’ team and regularly watched Rovers when they lost their stadium in Bristol and played down the road in Twerton Park. But this is Positively Arsenal and so I doubt you’d give a monkeys. The fact is that blogs, whilst seeming like a gift from God at first, are actually a part of the malaise of the modern sports fan. There used to be such a break from football every summer that you had the most incredible sense of anticipation and excitement when the season began anew every autumn. There were minor withdrawal symptoms for the first couple of weeks but really by the time the FA cup had been lifted you were ready for a break. Now we discuss the team, their prospects, the season past, the players the endless bloody pointless transfer speculation right through the summer and watch the pre season and never ever let the thing rest and I believe it is sucking the life out of the game.

And yet here we are like junkies gathering around an empty crack pipe because that’s the closest we can get to a fix. Any blog will die without daily postings. People need to know it’s there and that they can meet up and chat. Like a pub that opens and closes sporadically and will soon find people drink somewhere they can actually rely upon being open, a blog needs to be fresh and new and filled with stuff every single day. Even when there’s actually next to nothing to talk about. What do we do folks? This is your blog, how can we meet your voracious appetites for Arsenal related verbiage and yet not end up in a dead horse / flogging scenario? Because I need this place to be open for business. I need a retreat from the daily panto into a world of reality and I don’t want this golden egg laying goose to be found dead one day.

OK OK sorry, I promised not to be self indulgent and then look what happened. So for those who want a proper blog with up to date news and opinions here’s both.

NEWS: They arrested and charged the banana guy. You might say we need to stamp out any missile throwing from the crowd and you might say, it was a bloody piece of fruit for Christ’s sake.

OPINION: I can see both sides.

NEWS: Benik Afobe has torn his cruciate. Which is such a bastard of a thing to happen. Twenty years old and a very promising player.

OPINION: I neither blame Millwall, the loan system nor the Arsenal medical staff.

NEWS: Our chairman, when asked about the media story of a takeover is quoted as saying “It all seems a bit of a waste of time,”.

OPINION: It all seems a bit of a waste of time.

NEWS: Grandson of Arsenal footballer Denis Compton scores first test century against New Zealand while everyone but Mel was asleep.

OPINION: I thought he was South African?

NEWS: My Mikel Arteta sticker fell off my PC earlier and it stuck to my jumper and I don’t understand the significance. If there is any significance:

NEWS: A military force from an alien planet has landed in the Emirates car park and is resupplying its beachhead with big flashy light covered spaceships.

← The Secret Of Footballing Happiness
Ignorance And Stupidity →

32 comments on “Let There Be Arsenal”