" … if you're a supporter of a club, you have to be, through thick, thin, laughter, smiles and tears" – Bob Wilson
9 Comments

Posted by pedantic George @arseblagger on July 23, 2020 in All Posts 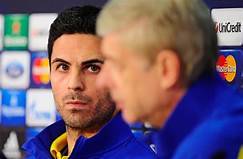 Arsenal Andrew has a few words of wisdom for us and the fanbase.

“Well, we did predict a more subdued performance following the thrillers v LFC and Citeh, and so it proved. All eyes on the cup final, one imagines and it would not surprise me if Watford cause more anguish in the meantime.

I think we have to understand that the Mikel Arteta direction of travel is where we want it to be, even if the squad currently is not. And let’s bear in mind it took Klopp 4 years and £400 million to create today’s Liverpool juggernaut** and even Ol’ Red Nose was close to the sack before his Man u came good. Okay, I know it only took Arsene Wenger one full season but hey, let’s be reasonable, he had the benefit of being Arsene Wenger.

It’s taken Citeh years of unregulated and unpunished financial doping to come within 15 points of this year’s champions. So given the restrictions on funds, we have got to recognise that there is likely to be only so fast – and so far – that Arteta can currently go with Arsenal.

Wenger’s genius was to take a mid-table club with mid-table funding to be competitive at the top table, not just for a few seasons, but twenty. He was so successful at this that most observers felt it was the club’s DNA that took them to that point rather than one man’s brilliance. Some people spent ten years or more claiming Wenger should have done more with what he had.

History already suggests he did far more with the limited resources available, than anyone could reasonably expect. And we already know there are those with far more resources who have achieved far less and who have received a fraction of the criticism Arsene received.

So one can only hope that this AFC fanbase at least can be fully aware of this lesson, get behind Mikel, and give him the chance, measurable in MULTIPLE SEASONS, rather than games, to take us back to where Arsene routinely led us.

Obviously a first FA Cup would do very nicely indeed but a final in his first half season ain’t bad.”

← A Blip Or A Reality Check ?
What Is A Successful Club, And Why? →