" … if you're a supporter of a club, you have to be, through thick, thin, laughter, smiles and tears" – Bob Wilson
227 Comments

Arsenal and the Brave New World

@GoonerReverend ponders the hereafter this morning and the Great Leap Forward

Football waits for no man and as recent events at Arsenal have shown the show always goes on no matter what is happening or who is leaving the game that is the English Premier League. Arsene Wenger & Arsenal have parted company after 22 successful years and the club is much stronger & much better positioned than when this partnership started back in 1996. The King is dead “Long Live the King” but now we have to prepare for the next chapter in the history of The Arsenal Football Club. Replacing a manager is never easy replacing a long serving manger is nigh on impossible and you only have to look at Manchester Utd to truly understand the scale of the task facing the powers that be in the Arsenal board room. Everyone has a view on who should be Arsenal’s next manager but at the end of the day the only opinion that matters is that of the Arsenal board members designated to choose Wenger’s successor.

The future is both exciting and frightening at the same time because nobody really knows what is going to happen when the new man takes over. Arsenal supporters all have their ideas on who should be the next manager with many demanding the appointment of a high profile manager like Max Allegri or Luis Enrique but the reality is that Arsenal have never been a club that appoints this type of manager in their entire history & are more likely to appoint a young manager with ties to the club as they feel that appointing a manager that fully understands and believes in the Arsenal values & principles will be of far greater benefit to the club’s stability than employing a short term fix that may or may not bring instant success. Fans have always been good at spending money that is not theirs because they don’t need to worry where this money is coming from and it is no different with the forthcoming appointment of the new manager.One of the fan favoutites & Juventus current manager. Max Allegri reportedly wants to know how much the Arsenal board will give him to spend on new signings & has supposedly said he would need to bring in up to 5 new players to make the team competitive. Now this is all media speculation as Arsenal never publicly divulge any discussions they are having or may have with candidates they have identified, The other alleged issue is that he is unsure if he can work within the new management structure implemented by Arsenal. Ivan Gazidis has now taken a hands-on role with the football club and moved his office to the training ground to be closer to the action along with Raul Sanllehi Head of Football Relations and Sven Mislintat Head of Player Recruitment.

This new structure is not going to suit everyone and Gazidis stated that he is looking for a manager that will be similar in his philosophy to Wenger’s along with the clubs philosophy of developing young players while working within the club’s self sustainability model. In this current climate of spend spend spend the Arsenal manager position may not be as attractive to some big name coaches as many Arsenal fans would like to believe it is. Luis Enrique has reportedly priced himself out of the position which is very believable when you look at Arsenal’s spending policy. Joachim Low has just extended his contract with the German National Team & despite the numerous rumours and many Arsenal fans insistence that he is coming Allegri is still contracted to Juventus and they will be very reluctant to let him go. If you believe the British press former Arsenal mid-fielder and current Manchester City No.2 Mikel Arteta is the red hot favourite to be the next manager of Arsenal. Sure there are a number of reasons why Arteta is not seen by many fans as the ideal replacement for Wenger as they believe his lack of managerial experience counts against his ability to transform the current squad into a title contending squad. 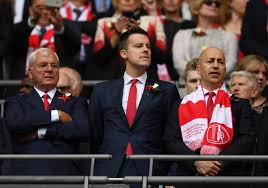 Some Arsenal fans had convinced themselves that the board would plump for a big name coach no matter what the cost but if you look at Arsenals history there is nothing to indicate that they were ever going to do that. Bertie Mee 1966-1976 Terry Neill 1976-1983 Don Howe 1983-1986 George Graham 1986-1995 Bruce Rioch 1995-1996 Arsene Wenger 1996-2018. Arsenal prefer managers with some connection to the club as they feel that if the manager has an intimate connection with the club they are more likely to respect the values of the club. Arsene Wenger was a left field appointment with no connection to the club but over the next 22 years became the focal point for the clubs values that he enthusiastically embraced and championed. Should Arsenal appoint Arteta as many are predicting it will clearly be a gamble but it will be a calculated gamble because they will be appointing a manager that clearly knows the culture and values of the club as well as many of the key stakeholders and football club staff and players he will be working with. There has been some negative comment about the possible appointment on social media but that is to be expected because everyone has their personal favourite and social media is the focal point for voicing disappointment.

Many fans believe that only a top coach with a history of winning trophies can manage Arsenal and turn them into a championship winning team but if you look at the growing influence of Josh Kronke you will understand where the club is possibly heading. In 2016 the Kronke’s fired Head Coach Jeff Fisher from their Los Angeles Rams football team and replaced him with 30 year old management rookie Sean McVey. This was a calculated gamble which has proven to be a good decision and it has become clear that Josh Kronke was central to this decision. Arsenal have always been a club that do things their own way and Josh Kronke is also a man who is very much his own man who likes to do things his way and is not adverse to taking calculated risks. There is no guarantee that the Arsenal board will appoint Arteta as their next manager but its even more doubtful that they will spend 10-15 million pounds a year on a high profile manager trying to buy success. Whatever happens and whoever they decide to appoint it is exciting times for Arsenal supporters because changing manager is a leap into the great unknown. No one really knows how it will turn out and in todays football world every new managerial appointment is a calculated risk. If Arsenal are going to take a gamble on a young manager with potential and give him the time & support to grow into the role we really are heading off into a brave new world and in the process we could be creating a new era of sustainable success for our grand old club.

← I Come to Bury Wenger, Not To Praise Him!
Arsenal Plan And Execute Managerial Appointment Perfectly →

227 comments on “Arsenal and the Brave New World”