Arsenal Versus Leicester: Ifs and Buts 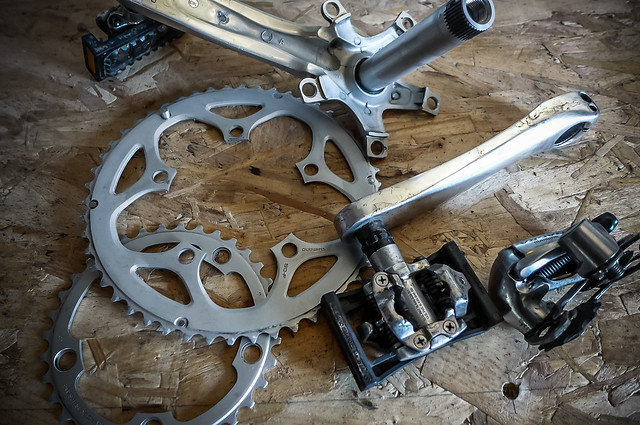 Today began well enough, ice on the windscreen answered to the scraper without undue recalcitrance and the breakfast was possibly one of my finest efforts. I like breakfast. In another life I’d like to be a breakfast chef I think. Then sadness as I turned the final page of the Shepherd’s Crown, a book I’d put off reading for too long. I hadn’t actually wanted to start it, my rationale being that if I didn’t open it then I would always live in a world where there was one more Terry Pratchett book still to read. Now there aren’t any.

Then I just sat here, sipping coffee and contemplating my day. A day in the shed I decided. Stripping and cleaning the parts of my bike until they shone and then carefully reassembling them, all the while hoping there wouldn’t be too many bits left over when I’d finished. Suddenly, into this blissful calm, a thought crashed like an overweight burglar through a thin conservatory roof.

Then a second, follow up thought, like the burglar’s bag full of crowbars and swag bounced off my brain.

They’ll be expecting a blog.

Luckily enough just the idea of a match is enough to set the pulse beating a little faster. Even though I’ve barely had time to digest the semi final, here I am slipping once more into the bath of anticipation, the suds of expectancy tickling my nose, the rubber duck of excitement bobbing with suddenly renewed vigour.

This may not be as mouth watering a prospect as mega rich Manchester City with a cup final place at stake but a match in prospect and one with much still riding upon it. Or perhaps I should qualify that with the word potentially.

There are a few ifs and buts still about the final league positions but with only half a dozen games to go the margins are becoming increasingly narrow. I think it’s fair to say we can’t afford any more unexpectedly poor performances. Not if we still have aspirations for a top four finish. Even Europa league football isn’t a given – as bizarre as that may sound to us.

There’s a reason for the confusion and anguish experienced by Arsenal fans at going into the closing overs of the season in seventh place. Quite simply the astonishing success of  Arsène Wenger in consistently delivering top four finishes for so very long has seen a generation grow up knowing nothing else. Serve people gourmet food for twenty odd years and they are bound to be confused if their supper suddenly comes from Burger King.

Any road up, it is what it is and we must make the best of it. I have really enjoyed watching Arsène’s response to the mini crisis in our league position. Ringing the tactical changes strikes me as anything but desperation, nor is it necessarily a masterful display of footballing knowledge. I think its man management, pure and simple.

The players were losing confidence, they were beginning to doubt themselves and if he’d kept on sending them out in the same formation with similar instructions things might have gotten much, much worse. Instead he shook things up, he said to them, look you’re obviously unhappy how things are so don’t worry, this is different, you’re in a new environment now. The old one wasn’t working properly and now that’s gone you can breathe again. With a few tweaks he ensured we had five at the back when ever we needed and big numbers up front when the chance arose. But the change itself is what the boys needed and haven’t they responded well?

Of course this is merely my amateur interpretation of events but like the all the best wild, unsubstantiated theories it at least appears to be born out by the facts. With Aaron and Granit getting to know one another, Gabriel in imperious form and Holding little short of a revelation I can see no reason not to be optimistic, not just for tonight but for all of our remaining fixtures.

We of course have some hugely difficult games to come and there are no guarantees but we’ve seen enough to enjoy at least a burgeoning hope that the team can end with a flourish – and who knows? Maybe even a trophy for the old cabinet.

But I am getting ahead of myself. First and foremost there is the small matter of the reigning champions who visit the Emirates this evening a mere three days after our heroics at Wembley. With the new formation still bedding in I would hope not to see too many changes but there must be tired legs in the squad – especially after playing extra time on Sunday. I have yet to see the statistics but we seemed to be doing a heck of a lot of chasing which is an exercise in resource depletion if ever there was one.

So with the dark clouds behind us and exciting new possibilities for the future springing up with every successful game it looks like we can sit back and enjoy the rest of what has been a turbulent, unpredictable season. Having done my duty to the blog I must don the rubber gloves and get to it, after all a shed is no more special than any other structure without a man fiddling, pottering, cursing and relaxing in it. I’m particularly excited today because I’m expecting delivery of my new Derailleur Alignment Gauge, a tool the very existence of which I hadn’t suspected up until a couple of days ago. Truly we live in interesting times.

← Wrighty Is So Wrong About Arsenal
Arsenal: Deflection and Guile →

94 comments on “Arsenal Versus Leicester: Ifs and Buts”