" … if you're a supporter of a club, you have to be, through thick, thin, laughter, smiles and tears" – Bob Wilson
33 Comments

Posted by ArsenalAndrew on April 14, 2017 in All Posts 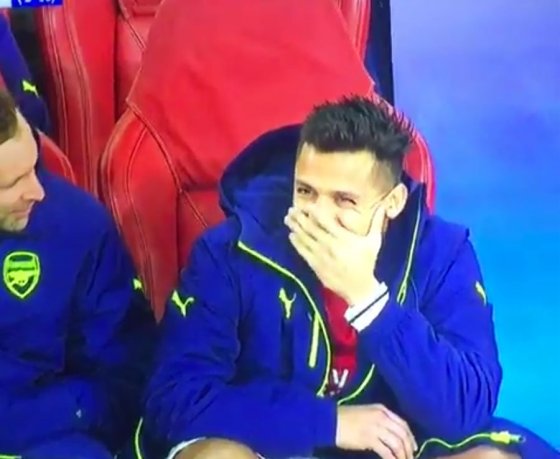 The false dawn of the West Ham result has proven to be a particularly bitter pill to swallow.

That game was a convincingly dominant, effective and exciting performance and one we all believed would surely herald the start of our traditional end of season run-in that would see us stake a place in the top four, at the very least.

What we got at Palace was something very different on a night when our supposedly star players were anything but regal. And almost immediately after the game the ‘war chest’ stories being floated had seen their headline sums inflate from a more modest £100 million to a snappy £200 million overnight. Walcott let the cat out of the bag, post-match, by confirming what we all feared – that our opponents somehow, surely inexplicably, ‘wanted it more’.

It was the single most damning and telling thing to come out of a dressing since Robin van Persie’s ‘updates for the fans’.

Quite what is the nature of the relationship between Theo’s cat and Alexis’s dogs remains undisclosed but we can probably assume it’s messy.

I’ve done the maths and whilst there is always a danger of getting to five when adding 2+2, I’m pretty sure that the handy extra £100m that has suddenly been added to our transfer budget by the forces of rumour, speculation and leaks from inside the club, will come from the £50 million Arsenal will expect to get for each of Sanchez and Ozil.

It was evident from the extraordinary performance of both players that neither were exactly ‘playing for a contract’ but instead playing very much for ‘a transfer’.

For me Sanchez has always looked like a square peg trying to fill a round Wengerball-shaped hole. Actually, he’s just looked like a square peg. Admittedly a supremely gifted and a dynamically attacking one. But not one that ever seriously countenanced fitting in with the team, assuming he ever actually understood that that was precisely what was expected of him.

We have seen, periodically, over many years, what happens to Wenger’s sides when the machine doesn’t fire on all six cylinders. It very quickly breaks down and invariably takes time to fix. As a rule, it’s been the influx of new players following a transfer window that has led to a temporary dislocation of the side and often with hilarious results with pundits falling over themselves in the queue to write off Arsenal prior to the bedding-in process of the newbies seeing a return to the stunning free-flowing stuff we all know and love.

Sadly, this season it’s all gone Pete Tong with the reverse of the above taking place with alarming results. The team this year is, uniquely, looking vulnerable and struggling for form and consistency at the end of the season, with our best matches all far behind us.

The signs with Sanchez have been evident for some time. His very public castigation of fellow pros on the pitch. The tantrums. His apparent ‘undropability’. His evident, barely concealed and juvenile jocularity during the Bayern Munich debacle that saw him giggling on the bench at the team’s ‘misfortunes’. To the acute discomfort of his nearest neighbour On said bench.

Not the actions of someone who cares a jot about the club and I can’t wait for him to clean out his kennels, roll up his poxy poster and take up a solitary berth on some other tramp steamer. Preferably a slow boat to China.

Ozil on the other hand is the greater tragedy, for me. I think he did (and possibly still does) care about the club and his team mates and Le Boss. He looks to have witnessed Sanchez’ antics and is heartily sick of the whole thing. Sick of the permanently squandered possession. Sick of the failure to play in better positioned team-mates. Sick of the selective industry brought to bear on his day’s work. That Sanchez is above and beyond the audible abuse of the fans – indeed the ignorant veneration of this ultimate non-team player is, instead, one of the last straws.

Ozil remains to this day, in the eyes of many, falsely accused of being the lazy one alongside the heroic Alexis who at least ‘always tries’.

If Arsene could level a criticism of himself it would surely be, for whatever reason, his failure to being Sanchez to heel. When he needed a lead put on him, Sanchez was allowed to run free, playing in every match, playing just however he felt like playing.

One suspects Ozil is a modest but proud man. If ever there was an actual final straw for him, our abject capitulation to his fellow countrymen on two successive occasions was it; the white flag of surrender to Munich was one that should never have been packed let alone waved on his watch.

I don’t for one second believe Wenger is ‘past it’ although I think he will always regret his handling of Sanchez, one way or another.

But Arsene is presently in a deep hole and whilst the truth will inevitably come out, for now he appears to have taken a huge hit.

There is no togetherness amongst the players and no talk of mental strength from the manager. The season can’t end soon enough. But the degree to which a heavily splintered, dysfunctional and misfiring squad will continue to free-fall was hard to gauge from the Palace match which, like countless others this season, saw multiple game-changing aberrations from the referee, universally to Arsenal’s disadvantage.

But it may already be too late, even if Middlesbrough were to represent another dawn of sorts. The points chasm now looks like needing a bridge too far.

The loss of Sanchez, whilst regrettable, is hardly the catastrophe that awaits.

The loss of Sanchez, Ozil and Wenger will be.

Finishing outside top four will most likely see our genius Frenchman say farewell.

Attempting to replace our star players from a non-Champions League berth will prove more than a little tricky.

Replacing Arsene will be impossible.

← A Death At The Palace.
Arsenal – Balance and Composure →