" … if you're a supporter of a club, you have to be, through thick, thin, laughter, smiles and tears" – Bob Wilson
23 Comments

Arsenal – jottings from the seaside

I thought I would break into the interminable Summer break, a hiatus that seems to have lasted weeks now, though the calendar tells me it is less.

Turning to matters AFC yesterday’s unveiling of Granit Xhaka was a bright start to the summer and the boy now has a chance to settle into the first team squad and acclimatise to life in England. The early move seems sensible. It may well be that with a significant change of personnel in our midfield, with Mikel, Tomas and probably the Flamster too on his way out that a few weeks is required to fit together all the pieces again.

The young Swiss player comes highly rated and, from what he says, Arsene was tapping him up on the ‘phone a year ago. ( Surely not !).I know very little about him and on the rare occasions I watched Monchengladbach last season, perhaps one or twice, he did not register on my radar. I look forward to being educated over the next few months.

A large transfer fee appears to have momentarily quelled the Scarfist jibber-jabber. I suspect their quiet will not last long once the transfer window is open and others are flashing the PL cash. There is talk of another striker, but who knows ?

Looking a little further forward we have the Euros commencing on the 10th when the hosts take on Roumania. With a select band of Arsenal players taking part in France there will be interest for us but, apparently, it seems to be a tournament where even now ‘security’ concerns are looming over proceedings. There will be much good football, and a few new names. I look forward to the event. As matters stand England have first to negotiate the ‘friendly’ with Australia on Friday night. Why playing the Aussies is regarded as a good final preparation and fine tuning for the Euros is a puzzle, as even Vardy seems to realise.

Talking of the relentless march of time Ian reminded me that it is 27 years today that “it was up for grabs now”. I can still see the rooftops of Lewisham and hear my voice. Happy St Michael’s day to you all and thank you Ian for the pic. 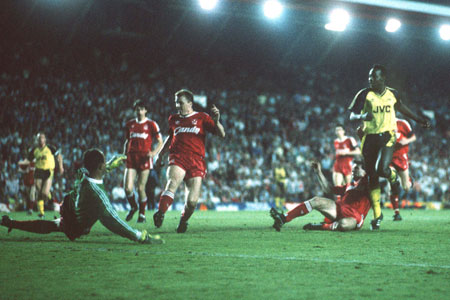 Enjoy your week and what over here is a Bank holiday weekend.

23 comments on “Arsenal – jottings from the seaside”