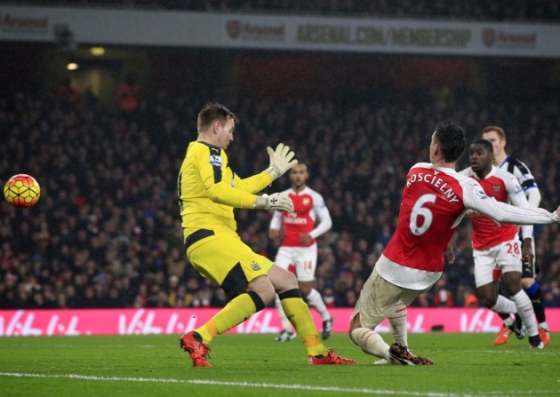 I think the lesson I take from this season’s Festive football fixtures is “to expect the unexpected”, and perhaps it will be the theme of the whole 2015/2016 campaign?

Having allowed the in game adrenaline to cool I enjoyed the game yesterday. We were clearly not at our best. After a bright opening we found ourselves out of ideas and the visitors worked their way commendably back in to the game. By the half way mark it was an even contest.

My pre game expectation was that Toon would come for a point, ten players behind the ball all afternoon, park the proverbial charabanc, and cross the half way line only with great reluctance. As matters turned out when they found they were able to and allowed to play football they responded positively. It made for better entertainment, looking back, albeit a little hard on the nerves at the time.

The hysteria about McLaren setting out to ‘kick’ Arsenal out of the game seem misdirected. Precious little dishonest aggression from either side although the Ox was a little fortune that Taylor was following the ball rather than spotting his scissoring an opponent after 20 minutes. Don’t do that at the Camp Nou son, it will be noticed. Colback picked up his traditional weekly booking – regular as clockwork that boy – remarkably consistent. These things happen, no harm done, both sides I thought treated each other and the laws of the game with respect.

Into the second half and for a few minutes the visitors really did have the initiative with Petr Cech earning his corn in his busiest home game since Bayern ( or Spurs !). Man of the Match was not in much doubt. There was little rocking along the back four and, unusually, for our intrepid and older Spanish full back the incisive Geordie thrusts were coming down that left hand side. Nacho had a difficult afternoon by his smooth standards but, to his credit, stayed on the job and put in a few important interceptions and tackles. When we went forward we looked dangerous to the edge of the NUFC box but after that, in the tight confined of Barcode Central, we never managed to find the extra space to put in a killer shot or accurate header.

The one serious error I thought McLaren’s and his boys made in the second half, after about an hour really, and when they were still enjoying possession and creating chances was to start wasting time. It may have been part of their game plan, it may have been because after an hour of running at us they were knackered. That breather for both sides changed the rhythm of the game, as did the introduction of that old piece of Costa Rican deadwood Joel Campbell ! We steadied, and began to move forward again.

And then the goal, described by some as a ‘tap in’, by others as a ‘classic poacher’s’ goal. Probably somewhere between the two but Laurent did very well to find that yard of space that had eluded every other Arsenal player all afternoon and despatch the ball efficiently.

After the goal I thought we were relatively comfortable. Not that Toon did not push us and put in a couple of late headers but our defending was more assured, with Gibbs and later still Chambo on, while the visitors became more ragged and both sides tired on a wet afternoon. And the newly pink cheeked Aaron nearly rounded off the afternoon with a beautiful solo goal. Unlucky son but don’t stop trying the magic. Not aware of any injuries so a good afternoon all round.

New Years Honours List for Arsenal yesterday; Medals for Cech, Nacho, Laurent, and Joel. Mentioned in Despatches the Flamster and Ramsey. Must try harder/naughty step certificates for Theo and the Ox, the former anonymous and the latter still struggling to balance his enthusiasm with doing the simple things well. For the visitors I award the best player pennant to Wijnaldum. I suspect that Mike Ashley will have him in the shop window before long.

A week to rest and recuperate before Sunlun at the Ems and almost certainly a few of yesterday’s starts benched or given the afternoon off. Fat Sam will also rest what passes for first choices among his motley crew of the SS Black Cat. We shall see.