" … if you're a supporter of a club, you have to be, through thick, thin, laughter, smiles and tears" – Bob Wilson
189 Comments 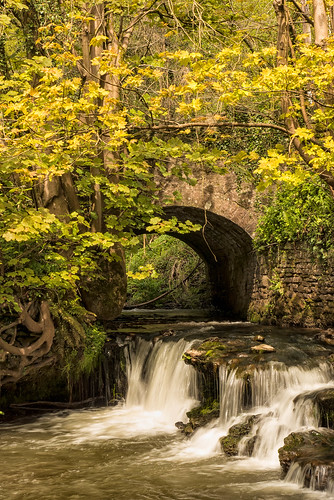 I made good use of a football free weekend. Or at least I tried to. Mother wanted a lift over the bridge to the land of dragons and close harmony singing, the home of Newport County and a world famous dyke. I thought to myself this sounds like a chance to walk abroad with my trusty Fujifilm and capture the beauty of the Angiddy Valley. A place once full of fire and steam and the toiling of men making wire from iron bars. By hand. Sat, if the helpful information plaque on the wall of the car park is to be believed, on swings.

That my plans went awry was largely due to the weather. No sooner had I slithered down a leaf strewn slope and set my tripod on the banks of the fast flowing river than the heavens opened and I was obliged to scamper for cover. The only place of shelter near at hand being the car, I sat and steamed and for want of a better distraction tuned in the radio to the good old BBC.

The first thing to issue forth from the speakers was news of the death of Jimmy Hill. A difficult man to warm to he was nonetheless a big fixture in my childhood football world. I suppose people told me about his work in scrapping the maximum wage and his career as a wing-half but I won’t pretend to you that I knew anything about these things. He was simply a face on the television. It seems from the eulogies flowing since Saturday that he did an awful lot for and to the game we all love but there is one aspect with which he is credited that should see people dancing on his grave with burning pitchforks.

Jimmy Hill, we are led to believe, invented the ‘panel of experts’. The television punditry which so blights the game and ruins our enjoyment of televised matches started with this man. May Satan have some suitable punishment lined up for him. Personally I always struggled not to slip into Bruce Forsyth while doing my Jimmy Hill in the playground and similarly confused him with the king who lost his head to Cromwell in history lessons. Otherwise he was, along with Moore, Coleman, Davis and the radio giants Butler and Jones, the voice of football during my younger years and a little piece of my past just died with him.

The other big talking point on Radio 5 as I listened to the Welsh rain battering the lid of the Skoda was the odious ex-manager of a west London club. I seldom ever listen to or watch any football related broadcast in English any more. The ill informed, illiterate, moronic and crowd bating level to which the journalism has sunken usually has me lunging for the off switch before my blood pressure reaches dangerous levels. Leaving the prating to filter through the door speakers and do battle with the rain turned out to be an instructive exercise.

I’d often wondered why fans feel the need to talk with such faux authority about situations, the facts of which they cannot possibly possess. Why people queue up to pontificate about what this player said or did to his team mates and manager in the changing room or on the training ground. Who is the unsettling, malicious influence in the squad and who the manager favours, who he dislikes.

No supporter is privy to such private conversations and thoughts and yet people cannot wait to share their wisdom on these facts despite there being no facts and precious little wisdom. Well now I know. They are aping the ill informed gibberish vomited into their cars and homes by broadcasters most of whom seemed to me to be doing a passable impression of Alan Partridge. Worse, they appear to believe they are taking part in some meaningful national debate when they tell us who said and did what to who and why it means they should be dropped or the board should resign or the technical director never be allowed to negotiate a transfer fee ever again.

The inarticulate buffoon presenting the segment to which I subjected myself was almost shouting with childish and transparently false emotion on the subject of the ex-manager of the west London club, “Show the man some respect!” he cawed, stupidly and repeatedly, apparently suffused with rage at some apparatchik on the club’s in house TV channel not mentioning the individual by name. Which is odd really when you think about it as the only thing anyone knows for an absolute certainty is the individual in question deserved no respect having so often acted with none of it himself.

Nobody has a clue whether the players wanted him gone or were trying or not. No one can see into their hearts or their minds and anything you read or write on the subject is guesswork, speculation and fantasy. Whereas we all know for a fact that the man was a graceless oaf with no respect for his betters and a complete inability to manage a football club unless everything was going his way. We know these things because we’d seen the evidence with our own eyes time and again. Yet some poor souls in replica blue kits ruined the family’s only decent bed sheet, took time out from their week to learn to write and scrawled messages of hatred towards their own players. These they took to the match so they could wave them in the face of a hungry media and all because of the swirl of lies and speculation with which the modern fan surrounds him and herself.

Don’t think I’m avoiding the subject of this evening’s match. Everything I’ve said about the fans and their take on the tale of the ex-manager of the west London club applies to our great club. Just because we have a more illustrious history and are led by a man of class, style, grace and intelligence doesn’t mean our fan base doesn’t also pick over the bones of the graveyard of common sense that is the British sports media. Our fans too regurgitate the entirely fictitious or perhaps occasionally purely coincidentally true nonsense they hear and read as if it was known fact and then pontificate upon it.

I think the lesson we can all take from the debacle at the west London club and the runaway success of Leicester City is just how fragile and elusive a sprite is confidence. You may recall me telling you of an injury I suffered falling from my mountain bike. I am only now getting back into my stride and just yesterday morning approached a simple jump with such a tense lack of confidence that I fluffed my lines and nearly came a cropper again. Two minutes later I took the same obstacle at a canter and flew over it with ease. My technique was the same in every respect, physically I approached the jump in identical fashion the only difference was I was relaxed and confident the second time. Why? How did it happen? I have no clue.

Remember how the Invincible’s form fell away after being dethroned by the machinations of Mike Riley and his master Ferguson in that travesty at Old Trafford? Once their intangible sense of invulnerability had gone the players seemed to lose their way. I would suggest the same thing has probably happened to a certain west London club and once the playing staff finds its mojo again their results and performances will improve. I accept this almost certainly factual answer lacks drama and intrigue and as such is less appealing to the masses, but there you go.

Will our players have the relaxed ease and confidence in their own and each other’s abilities tonight? Even if they do will Man City allow them to express themselves? Both sides have shown vulnerability at times this season and both have shown strength and ability too. Separated by the most slender of margins it is a moot point who is in the better form. Taken over the last six games there’s only one point in it with both sides firing and misfiring in a very similar pattern. The possible significance is our home form is much better than their away form. However there is so much at stake for both sides one must imagine that Leicester’s favoured outcome of a draw has to be a distinct possibility.

It’s a massive game. The first biggy of the campaign really with the chance to establish ourselves and the Foxes in a small breakaway from the pack. Very small I know but in such an unpredictable topsy turvy season the team or teams who put the first decent run together and genuine daylight between themselves and the herd will fancy their chances of making that advantage stick.

A resurgence from the team from west London could easily rock the boat if they start taking points from those in and around the Europa league positions – they play the fifth, sixth and seventh placed teams over the Christmas and New Year period and might just help to create a gap between the leading clubs and those chasing.

Much will be revealed through the outcome of the frantic festive fixture fiasco. Talking of festivities, I am off out to the shops now to buy my wife a small token of my esteem. So wish me luck as I battle through the consumer hell that is the Shires Shopping Centre, Trowbridge. Last time I was there it was evacuated for a bomb scare but hopefully I’ll be back in one piece in time for kick off. If not enjoy the game without me and try not to get too nervous won’t you?

← Out Goes The Weasel, In Comes Per Mertesacker
Arsenal – We are so very ‘umble →

189 comments on “Arsenal Versus Man City: Secrets and Lies”