" … if you're a supporter of a club, you have to be, through thick, thin, laughter, smiles and tears" – Bob Wilson
68 Comments

Posted by pedantic George @arseblagger on April 1, 2018 in All Posts 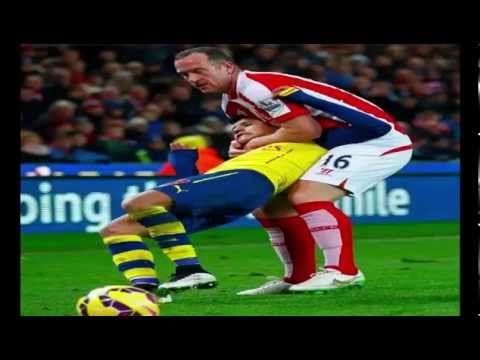 If I were to ask any Gooner to pick a PL team he/she just fkn hate, after Totnum of course, I’d bet 4 out of 5 would say Stoke. I’d go one further and say since the dawn of social-media 4/5 at some stage sent out a tweet or comment at the start of any season having Stoke on our relegation wish list. They are by no means what one would call a traditional rival of ours, but it’s still a rivalry not short of any bitterness. These orcs are the antithesis to Arsenal, play a brand of football that belongs in the 19th century and put in tackles that belong even further back. They deliberately took out too many of our players over the last decade without regret. So when their manager said in his pre-game presser; “we have to find a way to hurt them”… that should give us pause for concern.
Good morning one and all…
Stoke will be visiting the Emirates this afternoon, with the ignominy of having the worst away record of all PL teams this season, scoring the fewest away goals and with the temerity of having one 37 year old Peter Crouch leading their attack.
Of the three games Stoke won all season, (a rather controversial) one was vs us at the Britannia.  Their then manager has moved on to equally grey pastures and they’re now managed by Paul Lambert, an appointment that does not seem to fill Potters fans with much enthusiasm. He started off with a win but the seven games since are rather grim and win less.
So I hope we heap more misery on them to rob them even further of whatever little breathing space and fight they have left.
After we lost our way a bit we slowly pulled ourselves together and went into the break three wins on the bounce, having scored eight goals and conceding just one. Beat Spoke today (fingers crossed) and we can kick on to carry momentum into Europa which represent our one chance for Champions League football next season.
I don’t know about you but it filled me with joy seeing a full compliment of players back in training – sorry Santi. It’s been a while since Arsène Wenger had that luxury. With Lacazette expecting to lead the attack in Moscow we can expect him making a welcomed returned today, even if off the bench.
Good luck to our boys and home support, may they all give our manager his voice back to bid the Potters adieu on a win less Emirates streak.
Labo