" … if you're a supporter of a club, you have to be, through thick, thin, laughter, smiles and tears" – Bob Wilson
228 Comments

Arsenal – Tis I’ll Be Here In Sunshine Or In Shadow 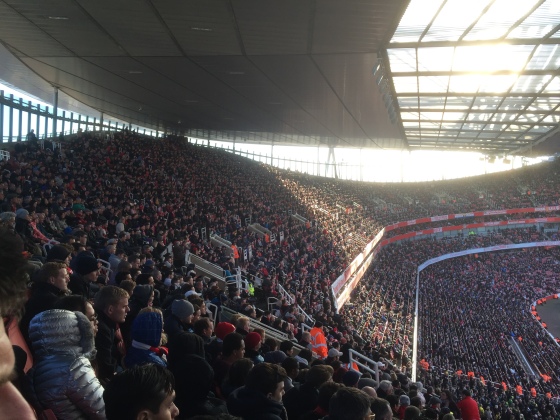 A memorable game yesterday at the Ems against a Norwich side who showed great endeavour and considerable footballing talent over the full 94 minutes. Credit to both teams.

Unlike those of you lucky enough to see the game on the TV I had the interesting experience of watching from a seat high up above the Norwich fans and under one of the large replay screens. As a result I had an excellent view of all goings-on in the ground, of which much has been spoken, but never saw one replay or reviewed one incident during the game. By the time I got home I was too drunk tired to watch the match again. That is a task for later today however as the family assure me I have a ‘doppelganger’, a perfect facial and body facsimile elsewhere in the Emirates. I await sight of my reflection with narcissistic enthusiasm. My recollection of footballing events is therefore based on “one take”!

As is our usual style we dominated possession first half but with limited threat to the Norwich goal. When we got toward the visitors’ box we could not slot through the next ball to split the defence, with a Norwich boot or head intercepting. Olivier worked hard against their two centre backs but to no result. There was a lot of sideways Arsenal movement from Mesut, Alexis and especially Alex Iwobi (who was in front of me). The ball moved mostly East to West as the stadium lies, rather than North to South. Now lateral movement can be a great means of testing defences, or identifying and prying open that weak spot in an opponent. In itself though, and with no direct thrust to accompany the sideways movement of players and ball, it achieves little. While the memory is a little fuzzy I think the only chance we had throughout the first 45 that caused a gasp was a Kosc header on half time?  Correct me if I am wrong.

For their part Norwich managed to gain control of the ball and on at least one occasion Cech was required to turn away what could very much have been the opener during what for him was an under-employed first half.

After half time I thought we set off at a brisker pace but still the Canaries managed to hold us off, although they began to sweat a little harder. Per departed with a hamstring problem, the first of the afternoon’s substitutions and soon after Danny Welbeck replaced young Iwobi. Thereafter Gabriel was very good yesterday, just the right combination of speed and steel. The latter change was greeted with some consternation but the manager’s reasoning was clear to me. Danny brought that direct “run-towards-the-goal-and-take-on-defenders” that our offensive probing had lacked for an hour.

Norwich were not really ready for that sudden adoption of the North to South movement and within a couple of minutes their defence cracked open and we took what was a deserved lead.

Thereafter the game was exciting. We had chances to increase out lead, a great shot on target from Mo, and two moves in which we opened the Norwich defence only for weak finishing or the offside flag to intervene. Norwich brought on a second striker as well as the most devious of footballers in Naismith (Boo). They huffed and they puffed but we were never ragged and the bit of luck that Palace had with their long range shot never came the Canaries way.

Referee Jones peeped his final contribution and off I went into the very pleasant North London spring evening. I read on here last night that Norwich were rough but I did not notice them being any more physical with us than we were with them. Naismith will certainly still have a bruise on his head.

I hope to see something of Jack and Santi before season end. If not then we have more than enough players to collect the points we need to ensure third place, or even better if Tottingham slip at the Bridge.

Two snaps today – the top one is the Clock End on 78 minutes. It is not a matter of what you can see, but what you cannot see.

And below we have three people who went to the game, met up with their friends, and had a good afternoon watching Arsenal Football Club, their team.

And ‘that’ is what it is all about.