" … if you're a supporter of a club, you have to be, through thick, thin, laughter, smiles and tears" – Bob Wilson
62 Comments

Morning Positivistas from a greyish Monday in Norfolk.

I take your mood, like mine, will be a little more elevated this morning going into the week, buoyed by three points taken at the Ems, earned in fact through a combination of some resolute organised defending and two instances of hitting the back of the net when the half opportunity presented itself.

The media microscope and cameras were on Olivier but my eye was taken very much to our back five who I thought played a blinder.

Kosc was quite obviously in charge, directing, pointing, shouting and taking a necessary card. Never put a foot wrong all afternoon in spite of Everton’s front men trying to run straight and hard at us. Gibbs and Hector did their defensive jobs quietly, thoroughly, no fuss and very few errors. Ospina pulled off a couple of good stops and a timely intervention. Who says ‘keepers cannot be clever footballers too?

Our new centre back made his first PL start. Social media was its usual demented self, as Gabriel first made an error by misjudging the bounce, then a skewed header, at which point he had been written off as a worse signing than Mikel Silvestre. Then in the 37th minute had performed a perfect retrieving tackle on Lukaku which may have turned the game. After that Gabriel had been anointed as the answer to all our previous defensive wobbles and poor old Per might as well pack his lederhosen.

Anyway to brighten your morning have one last look, before the PL insist it is taken down;

After those few opening flutters I thought our defenders played better and better as the game went on. Everton pressed and I was impressed with the quality of the crossing from their young Garbutt, but for all the pressing and puff at no time did I think we would crack and concede. Once we were ahead, the game was won.

Young Francis Coquelin may have a sore nose this morning but he has done himself no harm in gilding his reputation in the eyes of supporters (well this supporter anyway) for his willingness to battle on with a broken nose. There is talk of surgery which may rob us of him for at least the midweek game. My recollection of broken noses is however the insertion and deft twisting of steel rods to refashion the nasal sculpture which, although it will make his eyes water, should have him back on Wednesday.  And he can wear a mask which, in my opinion, is an accoutrement that every young footballer should aspire to.  The Telegraph captured the original coming together nicely. 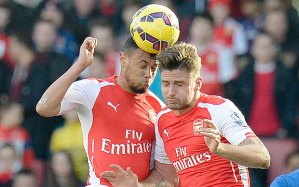 I was not expecting a classic game, but a difficult contest against a side who came into the game on the back of a Euro win, but a poor domestic record. Just one win in twelve PL matches Mr Martinez is relegation form, and you know it. Everton would have been delighted with a point, even that though was never a likely outcome. It was not a sparkling performance from us, but intelligent, measured football. The sort of performance on which a successful run-in can be securely founded.

While Roberto may therefore be justifiably feeling a little sweaty at the collar this morning, our form, since mid December, is the best in the PL bar none. I was a bit surprised to see we had won 28 points from a possible 36. I had not realised we had been quite so effective. Amazing what happens when we have most (although not all) players fit and firing. If we kept that up over a season we would have 89 points.

Makes you think doesn’t it?