" … if you're a supporter of a club, you have to be, through thick, thin, laughter, smiles and tears" – Bob Wilson
95 Comments 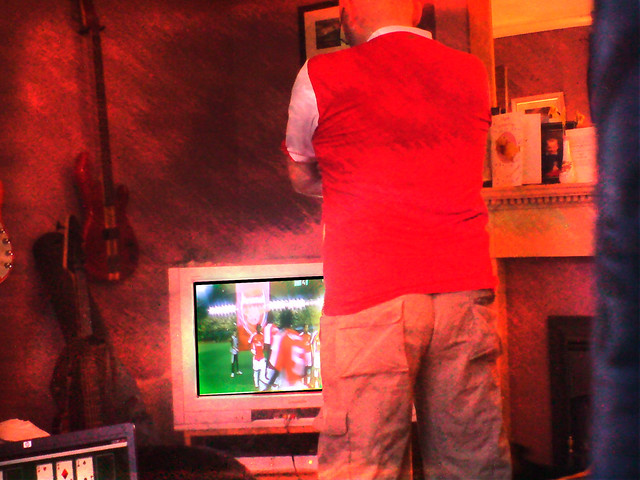 I own one of those portable screens, you’ve probably seen them, they’re about the size of a slim hard backed book and are terrifically clever. One can watch television programmes, read electronic facsimiles of books and play simulated card games on them. As I say, quite extraordinarily impressive devices and I never fail to give a small, disbelieving shake of the head whenever I press the button and the thing begins to glow.

The various functions are controlled by fiendishly ingenious lines of computer code commonly referred to as applications. In order to choose which of these is most suited to one’s need previous users are often kind enough to write a brief summary of their experience, a review, if you like. Apart from being extremely public spirited these reviews are also very useful, but it is neither their utility nor the generosity of their authors which set the wheels turning and prompted these words.

It was rather the nature of one review in particular, a stylistic approach complimented by its content, the character of which caught my eye. The writer simply pointed out how enjoyable the application was, how easy she found it to use and how wonderful it was to be able to employ this particular programme. Concise, succinct, positive and cheery, the author told us nothing of herself but spoke with a simple eloquence of her pleasure at having her leisure time so enhanced.

As I cast my eye down (or rather moved the electronic type upwards – such is the modern world) I couldn’t help notice how different the majority of contributions from other users seemed to be. Self consciously acidic in tone, often little more than an opportunity to show off how much more they knew than than the people who had designed the application; how much better it could and indeed should be. There was an impatient arrogance and a burning desire to tell the world just how clever they were and how crucial it was that their opinions be shared.

There is, as you’ve doubtless already ascertained, a certain parallel to be seen here. An analogy with the world of the modern day football supporter. In truth the self same bombast and self important impatience with the experts is rife on any topic from climate change to cookery. The decline of the football fan isn’t the disease, merely another symptom.

I am these days firmly in the same camp as the lady who was simply delighted at being able to use something called Netflix on her shiny portable screen. I am happy to find the technology so helpful when I want to watch a football match. I’m glad to be given so much information on the players, to be treated to regular expert analysis on the club’s website by a certain Mr Clarke and to be able to cheer my chosen team along in the virtual company of many like minded folk.

I see absolutely no added value in attempting to understand why one season may be more successful than another, and nor do I want to convince hundreds of strangers that my opinion is more valid than theirs. I absolutely do not wish to involve myself in telling the experts at the club where they’ve gone wrong. Until someone can give me a convincing explanation as to how any of this would make an jot of difference to the fortunes of the players on the field or the running of the club I shall continue not to give a fig for such behaviour.

Today I am excited about football. I’m keen to get under way and watch the first match of the day as I travel to the Memorial Stadium for Bristol Rovers epic clash with Oldham. I should get home just in time to settle in front of my computer for the Arsenal versus Middlesbrough game. Whether Rovers have a realistic chance of a play off place or Arsenal a prayer of a top four finish is a matter of supreme indifference. There are two games of football to be enjoyed. Teams and managers lined up in a test of will, skill, tactics and fortune and all I have to do is first stand and then later sit back and watch. I can shout and cheer or groan and despair but I’m only a spectator, I’m not a part of either of the clubs I follow and they owe me absolutely nothing beyond a game of football.

It hurts me to see players or managers coming out with forced public relations statements alluding to them having ‘let down the fans’ as if they are performing solely for our benefit, striving only to please us. We are grown ups. We are able to deduce that their prime motivation is a powerful competitive urge present in all sports people. They want to win for their own pride, self respect and for their legacy in their chosen field of expertise. Pleasing the unwashed hordes in the cheap seats might add a certain spice to the occasion but unless we the supporters show ourselves to be an integral part of any success through unwavering and above all loud encouragement we forfeit any claim to even the slightest vicarious pleasure in the players’ triumphs.

So I shall enjoy the matches today and indeed for the rest of the season. I shall do so happy in the knowledge that whatever the temporary fortunes of my chosen club be they good or bad I am lucky to be living through a golden age where I am able to watch some of the greatest athletes the game has ever produced. I am able to do so with an ease I couldn’t have dreamed of as a child. Above all I shall do so as a happy amateur, a spectator and consumer, not an expert, not a critic and never, ever someone who thinks he knows better than Arsenal’s greatest ever manager.