" … if you're a supporter of a club, you have to be, through thick, thin, laughter, smiles and tears" – Bob Wilson
57 Comments

Arsenal: If Only We Had Santi Cazorla 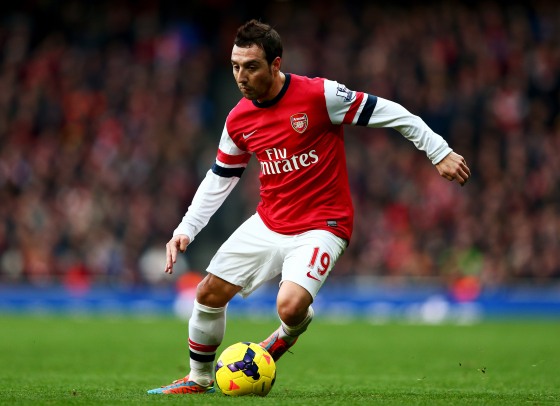 Last Saturday’s disappointing nil-all draw with Middlesbrough had many of us fans, including yours truly, rushing en masse to the comforting refuge of captain hindsight; somehow the result would surely have been better if only we had Santi Cazorla. I don’t blame fans for thinking this way given the pernicious effect of “Recency bias” on our psyche.

Therefore, it is hardly surprising that for most fans our strongest memory of last season, is the period up to the the end of November, nearly midway, with Santi pulling the strings Arsenal was atop the table. But after that nasty injury at Norwich, which resulted in him not playing again until the final game in May, our season went into a relative tailspin as demonstrated in the table below. Although not completely coincidental, Santi’s injury in late November is close enough to compare mid-season with full-season.

There is no denying there was a fall-off in results after December 2015, evident in an 18% decline in PPG between the first and second half of the season. But was Santi’s absence the cause or correlation. (Up to November 29th the actual PPG with Santi was 2.14 but it was time-consuming to do the additional research.)

One must note that the post-December decline also coincided with short to medium term injuries to key players. Alexis Sanchez also went down on November 30th and missed 7 games. Even though he returned on January 7th it took him weeks to regain the form he showed pre-injury. Aaron Ramsey had two major absences that season; the first was pre-Santi’s and the second, a thigh injury, was for 27 days between March 8th and April 4th. Özil also had time-off post Santi’s with ankle problems late March. Arteta and Rosicky, then squad players, were crocked for all of the post December period. Surely the cumulative effect of injuries must have played a part in Arsenal’s eventual demise.

But even with Carzola in the first-eleven Arsenal’s PPG was only 2.05 (or 2.14). In a previous blog I highlighted that an average PPG of 2.32 is the magic number for all premier League winners in the 12-year period since 2003-04. Evidently with him in the side AFC was not playing championship level football at least not on a consistent basis. So what of the prior years with Santi playing?

Before diving into the data, in one of the classic transfer mind games played by Arsene Wenger, he cleverly downplayed the signing of Cazorla from Malaga, days before it was made official, when asked by the assembled media in Malaysia (where the team was on tour):

No [we are not close]. Maybe we will sign a Malaysian player!

Without a trace of irony, Arsene then turned around and played him in all 38 premier league games that ensuing season (as well as champions league and FA cup fixtures).

From the table above, it is obvious that Santi Cazorla has been the cornerstone of the rebuild of the current Arsenal squad after the break-up of project youth starting with the unfriendly divestment of Fabregas and Nasri in the summer of 2011 and the acrimonious denouement by Robin Van Persie in 2012. In the ensuing 3.5 years, until November 2015, Santi has been omnipresent in central midfield assisting with 33 goals and himself scoring 23.

Two separate columns are used to demarcate PPG(s) with Santi-playing and PPG(t) for team overall. Almost every season with Santi-playing the PPG is better than the team overall except for 2012-13 when by definition it had to be the same as Santi played every game. Except for year-one the PPG(s) exceeded 2 points peaking in 2013-14. Much can be made of why the PPG fell in ensuing years but my main concern is the overall team PPG was inferior without Santi. Surely he is the player who “greases the gears” to quote Wenger.

Despite Santi’s obvious role in making the team better, it is significant at no point did his or the team’s overall PPG hit that magic number of 2.32 which I have demonstrated here is the statistically tested number to hit if Arsenal is to have a 95% guaranteed chance of winning the championship. Since Cazorla’s injury last autumn Wenger has strengthened midfied with Elneny and Xhaka, defence with Mustafi and Holding and forward line with Lucas. Is this sufficient firepower along with the rest of the existing squad to take us over the line?

← Arsenal: Pointing in the Right Direction
Arsenal versus Reading: A Royal Flush →

57 comments on “Arsenal: If Only We Had Santi Cazorla”