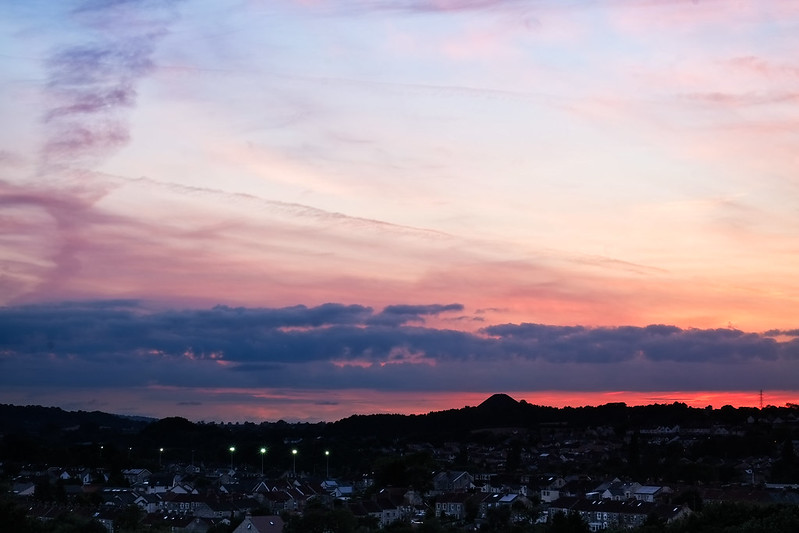 A couple of short months ago I wrote to you of a harbinger. Like the early snowdrop suggests the first death knell of another long winter, the removal of the goal posts from our local park signified that the football season was nearly over and summer lurked around its traditional seasonal corner. In what seems the blink of an eye the complimentary bookend to that perennial phenomenon has popped up in the very same park. Just last weekend I sailed down the A367 in my ailing Vauxhall Zafira and saw a group of lads bibbed and booted, balls at their feet taking turns to slalom through a row of slender red and white striped poles; pre-season training, Sunday league style.

Similarly, I was enjoying meandering with my dogs on a late evening stroll catching the last stare from the eye of a setting sun as it burned the horizon into a kiln of deep furnace red, when drifting on the breeze I heard distant, unmistakeable cries lifting from the town beneath me. The voices were carried aloft from West Clewes, home to Welton Rovers and while the ground itself lay consumed in an inky murk a twin row of white pearls glittered, an earthbound constellation distinct against the blackened town made by the floodlights used to illuminate a noisy and enthusiastic rehearsal for the approaching Toolstation Western League Premier Division season.

I’m sure these scenes are being repeated up and down the country. Boots are being dragged from under stair cupboards, football jerseys strained over summer paunches, hamstrings and calf muscles tentatively stretched in readiness for the battles ahead. For you and I there is only one point of focus today. Liverpool’s triumphant pre season victory over HJK Helsinki means as much to us as Exeter City’s use of Arron Davies at right back for their warm up against Torquay United. We have bigger fish to fry. Today is the only summer friendly watched by football fans regardless of the teams involved. The Charity Shield is the closest to a competitive game any side will play before the real blood-letting commences.

The result is irrelevant, and that fact is also irrelevant. This paradox arises mainly from two things. Firstly none of us enjoy seeing Arsenal lose and Chelsea win and secondly Jose Mourinho. The silly little man has been stamping his feet and threatening to thcream and thcream until he’th thick and all and thundry, sorry, sundry, have rushed to give him precisely the attention he so craves whether arguing his ridiculous contentions, belittling or agreeing with them. It’s all one. We as Arsenal fans didn’t need his most recent inanity to want to beat him. His club represents all that is hateful in the modern game and as such any chance to wipe the smirk from his smug mug is to be grasped and enjoyed to the full. To be honest if they brought back It’s A Knockout as a warm up for this game I’d be watching the proceedings with clenched fists willing the Arsenal side to fill their buckets of coloured gunk more quickly than their opponents.

I should probably apologise for this small departure from my usually calm and sober reflections on proceedings. Since the demise of Man United and because of my geographical remoteness from traditional North London rivalries I’ve needed a new pantomime villain and Chelsea just goes out of its way to fit the bill. Rest assured the result today will have no bearing on the league campaign, no relevance to our future performances against Mourinho’s soulless automatons nor any other side and will have no lasting emotional impact upon me. But I really, really hope we win today. If you sense a certain contrariety in my approach to this game all I can offer by way of excuse is this: Life is full of such disconnected inconsistencies and football is no different. Just because defeat in a non competitive pre-season friendly has very little actual venom in it, any triumph of our rivals at our expense still carries a certain sting, and like a schoolboy relieving himself on a wasp’s nest I will take the pleasure but happily avoid the pricks.

So what will happen today? I have no idea. Of course not nobody does. No matter how many of you spend how ever many hours debating the line up and whether it carries hints for the competitions to come, you had just as well argue as to whether or not it will snow on Christmas Day 2022. I do, however, have the ability to analyse previous encounters between the sides and can surmise from those that Arsenal will attempt to play with ebullient exuberance and Chelsea will look to contain and smother and hit with fast efficient counter attacking football. But then, having said that, I can also imagine Arsène sending his troops out to employ a more pragmatic approach like for instance that we saw against Man City lasts season and Violet Elizabeth to throw caution to the wind and prove his critics wrong with a free flowing attacking game of flair and invention. Who knows? After all if you wanted to experiment against top opposition with a little pressure but in a game where the result didn’t matter today would be the day.

The fact that there is such debate as to our best first eleven or the possible permutations for future fixtures speaks loudly as to the incredible depth of talent in the squad. Put simply, it is impossible to name our starting line up. Whichever way you slice it Arsène has assembled a group of players of such an outstanding calibre that more than one man who would walk into any other Premiership eleven will be sat on the bench today and, injury Gods willing, for many matches to come. It is of course the very extent of the squad which will assist with our injury situation. Look how long the manager was able to give Theo to properly recuperate. With high class cover in so many positions there is simply no need to rush a man back from injury nor play him when in the fabled ‘red’ zone. Given that outrageous bad luck with injuries has been the principle if not the sole reason we haven’t won the league at least once in recent seasons this augurs well for the future.

Anyway, I’d love to share more of my wild assumptions and reckless assertions with you but I am taking part in a film today and need desperately to attend to both hair and wardrobe lest I disgrace the Black family name before an adoring Youtube audience. Before I go allow me to make one small suggestion. All this afternoon should really mean to any of us is the chance to see our boys have another run out before the real stuff starts next Sunday lunchtime against West Ham. Of course I know you’re getting a bit excited and I am too, so how about this. I submit that we celebrate in an entirely over the top and inappropriate fashion if we win and shrug it off as an irrelevant pre-season warm up game if we lose. Think about it – it’s win win. The only people who should get bent out of shape if we fail to raise the shield today are the same troglodytes who always come blinking out of their holes after a setback, and they provide us with the perfect distraction while we come to terms with defeat.

It’s a day out at Wembley in the sun for those lucky enough to be there and a pleasant couple of hours in front of a screen for the rest, no more no less. Next week the proper games begin, today is your last opportunity to simply relax and enjoy a match so why not do just that? Before you know it the goal posts will be taken down at the local park and summer will have rolled around once again. The more time you can spend happy in between then and now the better your life will be.

← Will Arsenal’s British Core Meet The Challenge?
Yeah?? Yeah!! Get In There →