" … if you're a supporter of a club, you have to be, through thick, thin, laughter, smiles and tears" – Bob Wilson
36 Comments

Arsenal Versus Nobody: What I Did On My Holidays – Part 1 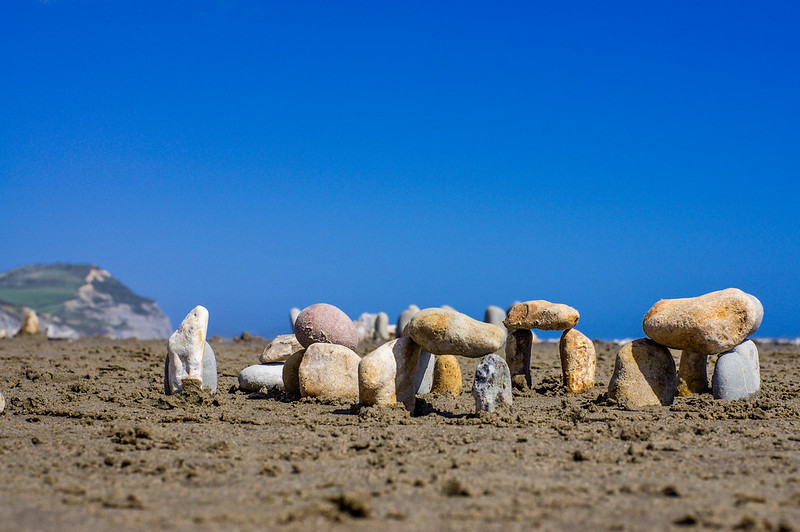 It never ceases to astonish me just how much I accomplish from the moment the curtain falls on the football season. It seems illogical. The game itself is played over ninety minutes and even allowing for added time and the fifteen minute break for the players to enjoy their oranges and a vigorous rub down the entire event can easily be wrapped up in less than two hours. On some weeks Arsenal play two games but even then that only takes up four out of an available one hundred and sixty eight hours.

So how come I have all this free time once the football season finishes? Given that one of my favourite distractions is to watch test cricket and the games there run to five whole days at a time one would imagine I’d have less not more time for exciting jaunts to darkest Dorset and luncheon engagements with number one daughter. And yet every summer it’s the same. The weekends especially seem to stretch out into a boundless, infinite, never ending tautology of adjectives and Wednesday evenings find me kicking about the old homestead like a recent parolee unsure of how to cope with life on the outside.

I wonder of this is what drives the brain dead obsession with non existent transfers? Can this sudden excess of leisure time create a vacuum which sucks otherwise sane people into pretending they know how much money James Milner will earn next year, and worse than that into thinking it matters? I don’t think so. In truth I believe the vile hacks of our corrupt and dissembling press corps feeling the lash of their editor’s whip and, compelled to squeeze the desiccated fruit of football for one last drop, invented the transfer circus as a means to keep football on the back pages.

In a halcyon past summer sports writers simply dropped football and wrote about other sports. When the season began again everyone felt refreshed and excited for the start of the new campaign and that is exactly how it ought still to be. Sadly the reptiles have won and with social media as the perfect tool to spread the madness, an army of us amateur writers with blogs to maintain and a football obsessed public unaware that less is more, they have created the perfect storm. If the journalists had decided the subject should be footballers’ hair styles or cars I’m certain a gullible nation would debate these asinine matters with precisely the same slavering vigour and passion as that with which they fantasise about transfer fees and wages.

I prefer to opt out. I don’t care about footballers of any club except Arsenal neither am I qualified to speculate on their suitability to relegate one of our own players to the bench and so I don’t.

So, what to write about on non match days? I thought I might bore you with a running commentary on what I do instead of football. The first people to benefit (or to suffer depending upon your point of view) are my family. I have had two days out this week firstly with my daughter, Daisy, and secondly with my mum. Daisy and I went to Bristol for nothing more than a mooch about and an opportunity to photograph the weird and wonderful folk of that fair city as they went about minding their own business. The place is famous not only for slavery and cigarettes but more recently for it’s graffiti artwork, a celebrity born largely out of it’s association with the artist known as Banksy.

I can’t tell you if the painted walls are more or less common place in Bristol than they are in any other British city nor whether the work is of an especially high standard. I was however particularly taken with a rather inventive piece of street art on the side of the old police station in Nelson Street. Instead of applying paint to the stonework the artist had made use of the pollution and general build up of grime which despoils so many of the nearby buildings. By carefully cleaning away the dirt to reveal the clean stone beneath he or she had produced a kind of artwork in negative. In this case a flock of birds flying up from the corner of a window. I intended to get a snap of this wall but photographs of walls, no matter how cunningly adorned are a little flat and not the most interesting and so I waited for some unsuspecting humanoids to wander into the frame and lend it some life. 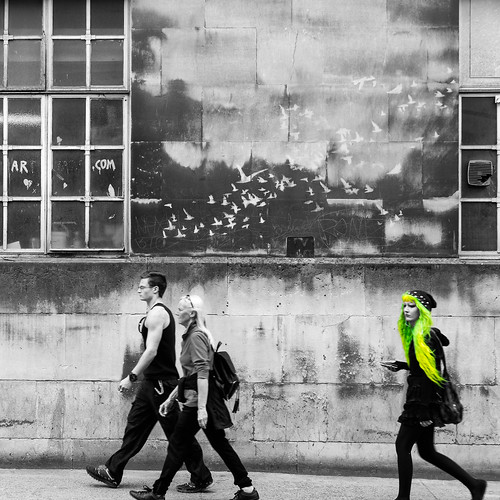 The three people in this picture duly obliged and I was so taken with the young lady’s hair that I made it a feature of an otherwise drab shot by removing (or desaturating if you prefer) the colour from the rest of the scene. It’s a technique known as selective colouring and one much frowned upon by ‘serious’ photographers but it served my purposes well in this instance and so yar boo sucks to the lot of them.

On Wednesday my mum and I travelled to Dorset, stopping off on the way for a gawp at Montecute House. If you’ve never been it is a fabulous old pile built in the English Renaissance style at the end of the sixteenth century. I have an interest in ancient architecture which burgeoned when I worked as a steeplejack specialising in the restoration of ecclesiastical buildings and as such the outside of places like Montacute offers far more than the costumes and wallpaper of the interior. In this case however the inside holds many fascinations as well – not least the long gallery which runs the length of the second floor and within which the National Portrait Gallery has on display many fine Tudor and Jacobean paintings including a startling portrait of King James I by John de Critz. This is so lifelike that I’d been chatting to it about the likelihood of Higuaín coming to the Emirates for a good ten minutes before I realised my mistake.

In other news I’ve discovered a television series I’d not heard of before called Banshee. If you’ve not seen it I shan’t give anything away but what I can say is that along with many other shows currently in vogue it is built upon a bedrock of creative violence and soft porn. Now please don’t misunderstand me I can watch either with the same keen appreciation as the next viewer but unless they are no more than adornments on some otherwise interesting characterisation and plot development then a programme can become pretty stale, pretty quickly. The cartoonish quasi martial arts violence I can cope with (there is a particularly nasty razor blade / penis moment which will take no small amount of time for me to forget) but not when the protagonists spend up to ten minutes bouncing one another’s heads off immovable and unforgiving objects such as the corners of enamel sink units, kerb stones and anvils only to leap up and continue their pugilism with barely diminished enthusiasm. I’m all for suspending my disbelief but unless the drama is set in a fantasy world it needs to obey some basic laws of reality or I get turned off pretty quickly. Having said that the set up of the story has legs and I think I might try season two. Also the soft porn scenes are tastefully shot and the participants sufficiently energetic and enthusiastic to hold my attention until the next unlikely fight breaks out.

That’s about it for this week. I’ll be back for another non matchday round up next weekend. Until then enjoy the break from all things Arsenal because let’s face it everyone needs a holiday, even from that which they love.

← Can An Idiot Be An Expert ?
Arsenal Fans Need A Reality Check ! →

36 comments on “Arsenal Versus Nobody: What I Did On My Holidays – Part 1”