" … if you're a supporter of a club, you have to be, through thick, thin, laughter, smiles and tears" – Bob Wilson
55 Comments

Arsenal: The murmur of success in the Land of Giants 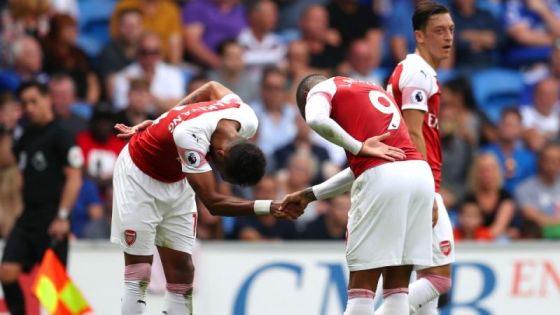 A thoroughly entertaining game in Cardiff, though at times I admit I was a little ‘tense’. Three points banked in the PL nevertheless and a professional win in the sort of stadium environment we have buckled in before.

Of our lads I hardly need to enquire who would be the unanimously elected Man of the Match do I?  Alexander Lacazette was superb today throughout the 90 minutes, producing what was his best performance ever in the Arsenal shirt.A week ago the ‘Ammers own goal robbed Laca of the plaudits, Fate did not quibble today. TH Frenchman’s  movement was intelligent and crisp. He controlled the ball, rarely wasted a  lay off, and was constantly AVAILABLE for a pass from team-mates, ready to collect the ball, and turn an opponent. Cardiff did not know how to play him and never had him worked out. That his third Arsenal goal was decisive, the winner, was suitable reward for the excellence of his effort.

Other notable performances from Hector, who had a right battle with Hoillett all game, and from both central defenders who had a hard afternoon against an enormous Bluebirds line at dead ball situations. The marking went wrong once but the other 12 times we resisted the bombardment well. And Auba ? Super goal.

You may have noticed and enjoyed Torreira’s contribution after his introduction in the 71st minute. Again he is a very tidy player who, when he gets the ball, never loses or wastes it. He is blessed with a tiny turning circle. Second point though, Lucas was fouled twice, and for both fouls the Cardiff player was carded, with our Uruguayan rolling  about with commendable brio. The game was broken up, the Welsh stopped in their tracks for a minute each time, while our player recovered. Is this a little of the black art, the Latin art,  that is required in the closing stages of games ?

I suspect the Xhaka fan club may not have had an easy afternoon with the Swiss accident prone, and Emery and the “passing-out-from-the-back” programme may need a little more, actually a lot, lot more, work. I shall take the points without embarrassment as the better football side won.

Of Cardiff they will struggle. I did not see one player who looked above decent Championship standard. The Welsh side have heart in spades, but no art.  Great support  from both sets of fans.

Enjoy the remainder of your Sunday.

← Arsenal: Over the Bluebirds
A Swipe At Pundits And Social Media “Experts” →

55 comments on “Arsenal: The murmur of success in the Land of Giants”