" … if you're a supporter of a club, you have to be, through thick, thin, laughter, smiles and tears" – Bob Wilson
127 Comments

Arsenal Versus Sunderland: Sparkling Near The Brim 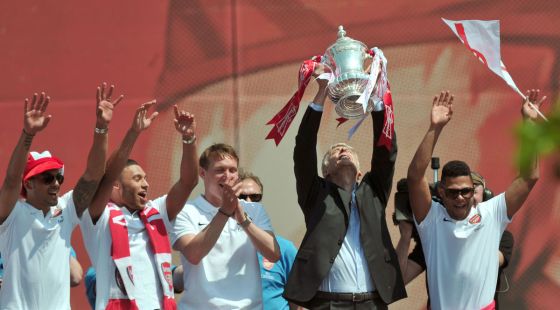 Is it just me or does it seem an awfully long time ago that we last had a game of footy to contemplate? I suspect the schedule of one match every twenty minutes which we experience over the Christmas and New Year holiday acclimatises us to a more frantic agenda. Combine that with the ominous creak that is the transfer window being dragged open and we are in the kind of territory which kept Isaac Newton up chewing his pencil to a stub all hours of the night.

During the festive period time speeds up to an amphetamine insanity with exhausted teams staggering punch drunk onto the turf having barely had chance to get their kit dry in time for the next fixture. Vic Akers and his minions must have a bloody nightmare in the laundry room while the rest of us are carolling and making with the crackers and paper crowns. Then, without the opportunity to as much as change gear, we are plunged into January.

Each minute of this benighted month is like a long drawn out dental procedure. Time slows to a glutinous crawl as people spend their every waking hour discussing the most pointless and boring topic known to man. Transfers. Players who they don’t know (and occasionally some they do) and whether and for how much they might or might not leave their current clubs. Mind rupturing conversational tedium, flowing with glacially sluggish momentum throughout the internet and, I imagine, in the pubs and work places.

The dislocating effect of relativity turns my senses reeling and I can quite see why Sir Isaac got into such a lather about the whole thing. It will, in fact, have been a week since we last played. A performance which while not quite as bad as some would have us believe was nonetheless pretty turgid in patches. My experience, and my gut feeling, is that a side freshened up with a couple of new faces and after enjoying a full seven days of monopoly and table tennis ought to present a different proposition. The team which sweated and stumbled its way to the narrowest of victories against Newcastle should have revived sufficiently to put up a spirited defence of our cup.

Make no mistake this competition is ours to lose and everybody else’s to win. We are not simply the holders (or ‘champions’ as we are being encouraged, for no obvious reason, to say these days) but the most successful club in the history of the oldest football competition in the world. Our manager shares, along with George Ramsey, the position of the most prosperous manager in the competition. With no disrespect to the esteemed Mr Ramsey who’s most recent victory came, after all, in 1920, we can state without fear of contradiction that Arsène has enjoyed greater success in the FA Cup than any other manager in the modern era. Although I suppose that depends on when you date such a nebulous period of recent history. Gosh, time is a dodgy subject for a scientific illiterate like myself to get involved with isn’t it?

I shall draw a veil over the vagaries of temporal inexactitude and move swiftly along to assessing today’s opponents. Managed by the pugnacious, pug faced old warhorse that is ‘Big’ Sam Allardyce, Sunderland will be, as Arsène informed the slavering asylum escapees at his press conference, well organised and well motivated. This is especially true when one considers that the cup represents the only realistic opportunity for an open topped bus ride along the banks of the Wear in four months time.

Knock out competitions can throw up remarkable results. We all have our favourite memories from Hereford to Colchester, Wimbledon to Bournemouth – there is something for everyone. One of my happiest FA Cup afternoons was provided by today’s opposition. To be precise it was Bob Stokoe’s merry men, the 1973 incarnation of Sunderland, who pulled off a hugely unlikely Wembley win against the universally reviled Leeds United. We have also been on the receiving end of some horror shows in the Cup upon which I have no desire to dwell here today. My point is that given the propensity for surprising results in such competitions there is perhaps little to be gained from too close an examination of current form.

On the other hand I have a reputation for long winded seemingly never ending blogs to uphold around here, so with that in mind let us examine the current form of today’s opposition. Sunderland were convincing winners in their most recent fixture. That is just about as positive as it gets for the Black Cats I’m afraid. The win may have been by a comfortable three goals to one but it came at the expense of Aston Villa. Let’s be honest here. If Positively Arsenal put a team together tomorrow we’d fancy our chances of getting a result at Villa Park. Prior to that match Sunderland had lost five on the bounce and only Villa’s abject plight prevents the Wearsiders from being the bookies favourites to be entertaining the likes of Preston, Reading and Forest next season.

Granted we have blown hot and cold lately ourselves, but honestly, magic of the cup aside, we ought to have enough to get the job done today. This is realistic, positive observation. Not hubris, not over confidence and certainly not disdain for Premier League opposition. I know that none of us here are guilty of entertaining such deadly sins and we all know the players won’t be either.

The only circumstance I can imagine which might derail our defence of our trophy today is too many changes, such as those witnessed in the League Cup exit in Sheffield. While Arsène hinted in his press conference that he might rest Mesut but not Theo, I fear that the multiple change, over rotation junkies among you might be in for ‘little bit disappointment’ today. I certainly hope so. The frankly fanciful line ups I’ve seen bandied about (including I might add one which featured a player who has no connection to our club beyond that dreamt up by a journalist – shame on you) are no more than footballing suicide notes made up of player’s names.

I expect some rotation but more along the lines of Kieran, Ospina, Chambers and Ox than a sudden influx of youth teamers. But then we don’t do silly speculation here do we? Instead of second guessing the manager, let’s take a leaf out of his book and just take this thing one game at a time. The likelihood of any team winning the same trophy three seasons in succession are historically remote, statistically unlikely and extraordinarily difficult even for a great club like ours to contemplate. On the other hand we start each third round match with the precisely the same chance of winning at Wembley as every other club. So while we are realistic, and while we know we should look no farther than ninety minutes against Sunderland, it doesn’t hurt to dream just a little, does it?

127 comments on “Arsenal Versus Sunderland: Sparkling Near The Brim”