" … if you're a supporter of a club, you have to be, through thick, thin, laughter, smiles and tears" – Bob Wilson
161 Comments

Good morning Positivistas and a glowing Summer morning up here in Norfolk. 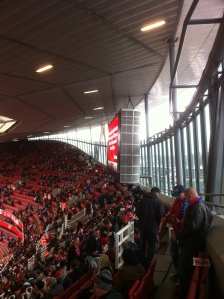 A fine game yesterday between what the succession of televised games over the weekend showed were clearly the two superior footballing sides in the EPL at the present time. Both demonstrated a quality of football and of purpose that the Citehs, Yooniteds, and Spuds and Saints are deficient in at the present time. And therefore while the result disappointed me as I would have preferred the flame to flicker a little longer in the season, the football I thought was pretty damn good.

And to the grit of the game itself which I had the opportunity to view from on very high indeed, and again on the TV last night ?

Our starting line up, no significant changes though with Bellerin back into after his Wembley break – it seems Arsene has decided who is our first choice right back and after the young Spaniard’s careful patrol of Hazard all afternoon, and some striking runs forward, who is to argue ?

My first ‘surprise’ was Chelsea’s decision to start with no recognised striker, even allowing for the attraction of them leaving with a point that seemed an odd one. Not so and in the first half I thought the visitors looked more dangerous, their best chances of the game from Oscar and Ramires. When Droggie came on at HT the attacking threat faded, with the poor old Ivorian reduced to shouting, waving and pointing after Michael Oliver in desperation. Should I feel pity to see a former footballing nemesis reduced to a toothless, dribbling old crone ? Probably, but it make take a year or two yet.

Overall though a very good defensive performance from all our back five. And did you see the number of cards we picked up in the last few minutes as we pressed and Chelsea threatened to cause problems with a breakaway ? Does that tell us we have players who have learned ? Yes it does.

Two midfield units worked hard throughout the 90 minutes and effectively battled each other to a standstill. There was very little time for any player to take a touch or look up to choose a pass and even Ozil, generally a man who can find space inside a telephone box, saw his usual poise hustled and harried. Coquelin and Matic tackled the heavy work, Santi and Ramires picked up the scraps and tried to create something with them. Aaron, like Hazard, found it difficult to get anything going on the flank against the capable Azplicueta.

My only criticism of our creative engine was that until the last 15 minutes or so we did not seem to move the ball through midfield fast enough, there was an extra touch, a half turn, that just allowed the defenders to regroup. That change may have had to do with Danny’s introduction, it may have had to do with slightly tiring legs. It did seem to me that last ten minutes that we were at our best, and they, blowing hard, leaning on the ropes.

But we all know it is goals that win matches and we have two of the best goalscorers in the PL.

Sanchez and Ivanovic was a chess match, the Chilean leading the large Balkan on, pushing the ball inside, down the line, at him. But never quite breaking young Branislav, though his late yellow card following a frustrated lunge at Alexis indicated that he understood the game that was in progress. For all his cruel taunting of the Serb however Alexis could not break open the Chelsea lock.

And up front Olivier ran, he hustled, he charged, he darted and flicked but against the double coverage of the ever popular Mr Terry and his sidekick Cahill he was always going to struggle. And Giroud did, but he was game to his final kick, he will have easier afternoons and more profitable ones.

So a good game, a timely reminder we have still work to do, and peaks to attack and conquer.

← Arsenal Versus Chelsea: Barbarians At The Gate
Arsenal Needs………. Say Those Who Don’t Know ! →