Today’s post comes from everyone’s favourite Lahndan Cabbie, and he doesn’t care where you’re from.
Take it away Mel… 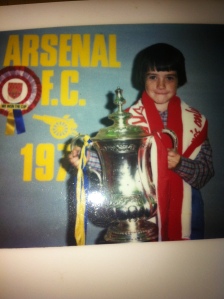 Amongst all the recent shenanigans between George and his twitter chums the one remark that struck me more than any other was this. When asking about his credentials as a fan (appearances, length of service, location) this guy told George his opinion was not valid. Bearing in mind that this was in the middle of a highly entertaining debate between a Yorkshireman and a Lancastrian (neither of whom will be sending each other Christmas cards soon!) the irony was clearly lost on this poor unfortunate who had butted in.

Now I’m from London. Yes bow bells & all that, born and bred, started going in 78 and still going. From Alan Sunderland’s winner in 79 to Alan Sugar’s equaliser a few weeks ago! I bloody love em. My mother still tells a story about when just after the above photo was taken I ran away from home taking just my Arsenal kit and some library books in a carrier bag. I made it to the top of the street and came back

“I forgot the socks”

came the reply (like I was gonna get a game). There’s nothing quite like The Arsenal is there?

On my non-football travels I’ll seek out places where I can watch a game if we’re playing and if a local turns up cheering us on or wearing an Arsenal shirt they’re  in danger of being bored and or drunk to death by me telling them about my night at Anfield in 89. My point is I appear to tick all the boxes, well bully for me. But here’s the thing: Does that make me a better supporter? Does it entitle me to more of an opinion than anybody else?

The answer is simple. Of course it doesn’t, if you’re Arsenal, you’re Arsenal. From New Delhi to New Zealand, from Angel to Alabama you’ll do for me. As long as you behave the Arsenal way I don’t care where you’re from, how long you’ve been supporting or if you’ve never seen a game live. In fact I’ll let you into a little secret – you probably know more than me! (I never did read those library books).

Now let’s face those cannons outwards a ltogether now! We all follow the Arsenal…over land and sea!…….

76 comments on “A Great Big Onion”