" … if you're a supporter of a club, you have to be, through thick, thin, laughter, smiles and tears" – Bob Wilson
26 Comments

Posted by pedantic George @arseblagger on June 10, 2013 in All Posts 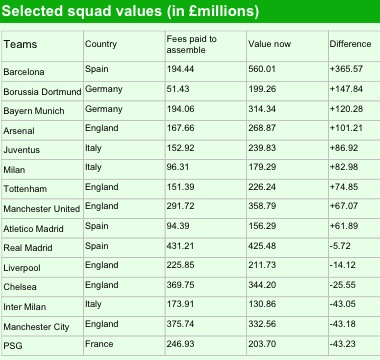 I am not entirely sure what this table proves,if anything.What it does show,is that according to what some hack has worked out on the back of his fag packet  Arsenal’s squad  is worth over £100 million more than we paid for it.According to this fellow from The Daily Mail then, of the major players in the BPL ,that is more than any other club.

That’s it for today I don’t intend to speculate on transfer nonsense,its all driving me around the twist.

26 comments on “Nowt Much Doing”